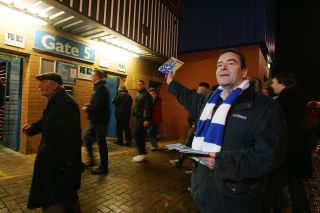 Capacity crowds and a completed season are the two biggest hopes for football supporters ahead of the new English domestic campaign, according to a new survey.

As part of the Sky Bet Fan Hope Survey, undertaken in partnership with YouGov, 2,108 fans from across the country were asked what was top of their wish-list from the 2020/21 term in relation to the impact of the coronavirus pandemic on the sport.

Some 44 per cent responded by saying having stadiums at capacity again was their biggest hope, with 24 per cent mainly wanting just to see the whole season completed.

Brighton admitted 2,524 fans for a friendly against Chelsea at the Amex Stadium on Saturday, with strict social-distancing measures in place around the ground and for seating in the sparsely populated stands.

The pre-season fixture was part of a number of pilot events announced by the Department for Digital, Culture, Media and Sport for a phased return of spectators following the ban on mass gatherings introduced in March.

Premier League chief executive Richard Masters praised the club for their efforts and stressed the governing body remained “committed to having full stadia as soon as possible”, with safety the priority.

🗣️ "The success of having 2,500 supporters in the Amex was very encouraging and we are committed to having full stadia as soon as possible, with safety always our priority"— Premier League (@premierleague) August 30, 2020

Jeff Stelling, who has hosted Sky Sports’ Soccer Saturday for 25 years, also hopes it will not be long before fans are able to once again enjoy the whole match-day experience.

“We all saw how much we missed the crowds during the restart – it just is not the same game,” Stelling told the PA news agency.

“Hopefully football itself has learned to appreciate supporters a little more during the time they have been absent.

“It is not just about the game, is it? It (game day) is a massive social event. Sometimes you remember the atmosphere at games better than you do the game itself.

“Whatever side you support, it is the whole occasion – going to meet you mates beforehand, having a beer, watching the game, drowning your sorrows or celebrating the win. The whole weekend for a lot of football fans revolves around it.

“Fans have missed that massively, and the game has missed fans massively. From both sides, we have got to hope desperately that crowds return sooner rather than later.”

Supporters were also asked on a scale of one to 10 how optimistic they were for their team ahead of the new campaign.

Manchester City fans were top in the Premier League poll with an average score of 9.24.

Stelling believes it will take some effort for City to overhaul the 18-point gap to champions Liverpool.

“I can see why City fans will be optimistic, because for me they massively under-performed with the players they had got,” he said.

“There is time between now and the end of the transfer window, and who knows what City might do?

“I think they will be closer to Liverpool, but I don’t necessarily see them being able to overhaul what was such a huge gap for them to close.”