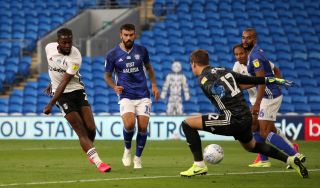 Moments of brilliance from Josh Onomah and Neeskens Kebano gave Fulham a 2-0 win at Cardiff and the upper hand in their Sky Bet Championship play-off semi-final.

Fulham were establishing command when Onomah came up with a 49th-minute solo goal that will be long remembered and Kebano doubled the lead with a superb free-kick in stoppage time.

There appeared to be no danger to Cardiff four minutes after the restart with Onomah 18 yards out and his back to goal.

But the former Tottenham midfielder turned Marlon Pack and rounded both Sean Morrison and Curtis Nelson before slotting past goalkeeper Alex Smithies.

It was no more than Fulham deserved as Scott Parker’s men underlined their reputation as the best passing side in the Championship and Cardiff – who finished one place and eight points worse off than the visitors in the regular season – struggled to lay a glove on them.

Fulham were weakened by the absence of Aleksandar Mitrovic, the Championship’s top scorer, and Parker explained pre-match that he had to make a “calculated decision” to keep the 26-goal Serbia international in contention for the rest of the play-offs.

Cardiff were unchanged from the side that secured a play-off spot by beating Hull – a third successive victory that meant the Bluebirds were the form team heading into the play-offs.

Manager Neil Harris would also have been buoyed by his play-off record as a manager: two appearances and two finals during his time at Millwall.

It was a lively start from both sides, but Cardiff carried the greater attacking intent in what was an open contest.

Leandro Bacuna’s swerving shot proved too hot for Marek Rodak to handle, but the Fulham goalkeeper was saved by brilliant defending from Michael Hector.

Robert Glatzel looked as if he would prod in the rebound, but Hector got there first with an outstretched leg and somehow managed to scoop the ball away in the same movement.

Glatzel would hit the target twice in the first half, but the German’s efforts lacked the power to ruffle Rodak.

Fulham slowly settled into their rhythm and Cardiff switched off at the far post to leave Onomah unmarked from Kebano’s cross.

But Smithies came to Cardiff’s rescue by flying off his line and spreading himself to save.

There was another escape for Cardiff in first-half stoppage time when Tom Cairney found space 20 yards out and shaved a post with a curled effort.

Fulham started the second half as they finished the first and, buoyed by Onomah’s marvellous solo effort, went close again when Decordova-Reid rifled just over from 20 yards.

Bluebirds boss Harris responded with a triple substitution at the second drinks break in an attempt to prevent being completely overrun.

Danny Ward, Josh Murphy and Will Vaulks were sent on and Cardiff responded to fashion a golden chance before Morrison’s control let him down.

That was to prove costly as Morrison body-checked Cairney and Kebano curled home the resulting free-kick from 20 yards, handing Fulham a significant advantage before the return leg at Craven Cottage on Thursday.