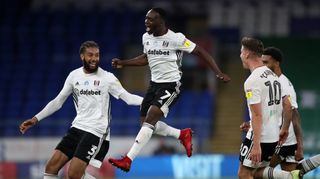 Curtis Nelson and Lee Tomlin struck to drag the Bluebirds back into the fight for a place at Wembley, after Fulham had prevailed 2-0 in south Wales on Monday.

But the in-form Kebano’s latest eye-catching goal proved the difference over the two-leg tie, sending Fulham to Wembley.

Former Paris St Germain trainee Kebano had toiled away on a 35-match drought dating back to December 2017 before the final weeks of his elongated season.

The 28-year-old netted twice in the 5-3 win over Sheffield Wednesday on July 18 however, and has not looked back since.

This crucial close-range effort is the first of his five-goal glut to be converted from inside the area.

More than that though, this was the finish that keeps Fulham’s dreams alive for an immediate Premier League return.

Their progression to the final was as nerve-wracking for manager Parker as it would be satisfying – especially as the Whites had to contend without leading scorer Aleksandar Mitrovic once again.

The prolific Serbia striker sat out with the lingering effects of a hamstring issue, perhaps in a calculated gamble from Parker to have him fit for Tuesday’s final against west London rivals Brentford.

Any risk paid off in the end, but not before Cardiff pushed their opponents to the end.

Now all that stands between Fulham and a Premier League return is Thomas Frank’s free-flowing Bees. The Whites have lost both league meetings with Brentford this term.

Fulham in fact lost their first match following football’s restart 2-0 to Brentford, at Craven Cottage. Parker’s men followed up that loss with a 3-0 humbling at Leeds.

Throw in losing captain and top-scorer Mitrovic to a three-match ban after that, and at the start of July Fulham were battling to stay even in the play-off frame.

The Whites had recovered from that Leeds loss however – and despite this home loss to the Bluebirds they now face a mouthwatering match-up.

Any designs Fulham had on a comfortable night evaporated when Cardiff took the early lead.

A back-pedalling Marek Rodak had to tip the ball over his bar after Will Vaulks’ long throw bounced high off the firm surface.

Just 24 seconds after the restart however, Fulham were level on the night and back in control of the tie.

Anthony Knockaert laid off to Bobby Decordova-Reid on the right flank, and his smart cross was met with an even more astute finish from the red-hot Kebano.

The Congo winger tiptoed round Cardiff’s static defenders to flick home in style, to calm the early storm.

Neil Harris’ visitors opened the second half as they had the first, finding the net with an early attack.

Half-time replacement Tomlin hooked in at the far post after Rodak’s weak punch.

The opportunistic finish had the Bluebirds leading 2-1 on the night – but still trailing Fulham 3-2 on aggregate.

Cottagers’ replacement Aboubakar Kamara drilled a low shot against the inside of the post and had to watch in frustration as the ball rolled to safety.

But Parker’s side continued to tighten up as the second half unfolded, and Cardiff kept pressing.

Nathaniel Mendez-Laing could not connect in a goalmouth scramble as the Bluebirds sought to level up the aggregate score. Fulham could not clear though, and Vaulks’ impressive hooked effort from 18 yards forced a fine save from Rodak.

Robert Glatzel blazed over late on as the luckless Cardiff pressed again, but this was Fulham’s night.