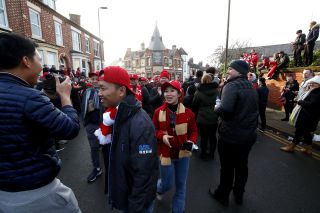 MP Ian Mearns has joined the Football Supporters’ Association in calling on the Premier League to reverse their broadcast lock-out.

Supporters are concerned they will miss watching their team during the current coronavirus restrictions.

The Premier League has decided only selected matches will be televised, returning to their normal format ahead of the new season.

During the restart after lockdown all Premier League matches were shown live on TV, including some on the BBC, but it will not be the case when the new season starts on September 12.

Quiz question: What do @premierleague fans in Saudi Arabia, North Korea, and the UK have in common?— The FSA (@WeAreTheFSA) August 26, 2020

A letter read: “With social distancing looking set to stay for some time, and with the success of Project Restart earlier this year, I’m extremely disappointed to learn that the broadcasting arrangements seem set to return to normal for the coming season.

“This will mean that for many fans and season ticket holders, matches will take place involving their teams which they cannot view or cannot attend because they have missed out in the ballot or have underlying medical conditions.

“Meanwhile many countries across the rest of the world will be showing all Premier League matches live.

“It would seem that the only countries where you would not be able to watch your team play every game for the coming season are North Korea, Saudi Arabia and the UK”

Sky Sports and the EFL have recently struck a deal with clubs streaming their home matches not covered by Sky on a paid for game-by-game basis.

Kevin Miles, chief executive at the Football Supporters’ Association added: “Surely it can’t be the Premier League’s intention to drive fans towards the use of illegal unlicensed streams, yet we seem to be in the position where the only people who can’t legally watch those games live are the citizens of North Korea, Saudi Arabia – and law-abiding fans of Premier League clubs in the UK.”