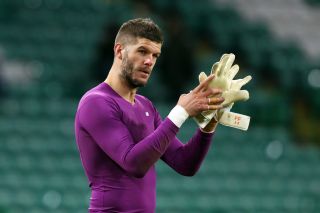 Goalkeeper Fraser Forster could make his first Southampton appearance in more than 16 months during Wednesday’s Carabao Cup clash with Brentford.

Former England keeper Forster, who spent last season on loan at Celtic and was a substitute for Saturday’s Premier League loss at Crystal Palace, has been given another opportunity to impress at St Mary’s by Ralph Hasenhuttl.

Midfielder Stuart Armstrong remains unavailable due to a thigh injury.

Brentford will assess midfielder Mathias Jensen ahead of the trip.

The Dane hobbled off in the early stages of Saturday’s 1-0 loss at Birmingham with an apparent ankle problem.

Bees goalkeeper David Raya has returned to training following a minor issue which kept him out the first-round win over Wycombe and the defeat at St Andrew’s.

Winger Said Benrahma, who like Raya has been linked with a move away from the club, has been struggling with a lack of fitness and an ankle problem and looks unlikely to feature.