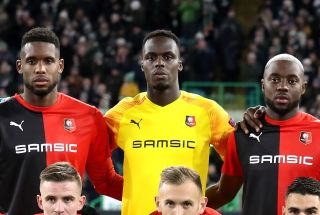 Senegal stopper Mendy joined Chelsea for £20million from Rennes this week, but not quite in time to make his debut in Saturday’s Premier League trip to West Brom.

Kepa Arrizabalaga’s Chelsea future will be pushed further into doubt by Mendy’s arrival, but Blues boss Lampard insists the under-fire Spain keeper will have further chances to prove his worth.

The £72million man Kepa and veteran Willy Caballero will battle it out to start at The Hawthorns on Saturday, but beyond that Lampard is adamant he wants a three-way fight for the starting berth.

“I’m not going to talk about who starts on Saturday because I need to speak to the goalkeepers themselves,” said Lampard.

“We know we’ve had problems in the goalkeeping area in the first two games of the season and at times last year.

“We can be very honest and open about that – and Kepa himself – in that search for the best performance levels. Mendy comes in to be competition in that area.

“I don’t want to talk about number ones, twos and threes at the minute because we’re not in that position.

“Mendy’s just come into the club and now it’s about how we move forward and trying to get that performance level as best as it can be.

“It will be very important for the make-up of the goalkeepers at the club that the level is competitive and supportive.

“In the three personalities I’ve got, and I met Mendy briefly yesterday, we have players that want to do their best for Chelsea Football Club and then will follow that hopefully with the performance we demand at Chelsea.”

Cech was pictured out on the training pitches working with Mendy on Friday, with Lampard admitting the 38-year-old has helped in an informal goalkeeper coaching capacity, to add to his boardroom responsibilities.

Asked if Cech was coaching at Cobham or just keeping up his own fitness, Lampard replied: “I think it was a combination of both. With Petr he has so much to give on that side of things.

“Obviously his daily job as we know here now is to be technical advisor and he has been a great help to me on that front, but where we have had restart and times where we are playing where there is a lot fragility, having Petr train with the goalkeepers and bring his experience is a great thing.

“He still has great quality. I think he retired pretty young. He’s training and keeping fit, which I think is healthy for him and the goalkeepers in the squad.

“I think it’s as far as it goes. I’ve got absolutely no problem with it. It’s something that’s really positive for the goalkeepers and Petr enjoys doing it.

“There’s no written rule to when he’s out there at the minute. I’m very comfortable with that.

“Petr came to me and talked about it before he started training at first.

“We were sort of suffering with the squad and numbers and now Petr is training very regularly with the group.

“Why would you not tap into having the best goalkeeper in the world, which he was for a long time, to pass on that knowledge?”