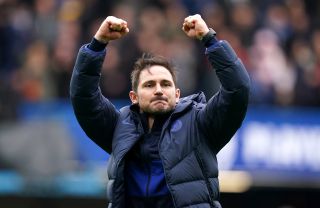 Frank Lampard has revealed the importance of crunching the phones when it comes to sealing the biggest transfer deals.

Chelsea have shelled out more than £200million overhauling their squad this summer, and every high-profile new recruit has cited Lampard’s personal touch as pivotal to their signature.

While the players have admitted Lampard’s influence, the Chelsea boss himself has now admitted his part in pushing those deals over the line.

“You understand when it is the competition with the likes of Liverpool and Manchester City that you need to state your best case to the player,” said Lampard.

“I think having been that player at one point, the idea as a manager is to try and sell the club and how I want to move forward.

“Petr (Cech) in his role does the same and I do that to the best of my ability when I speak to players.

“With a player like Timo (Werner), we were very, very keen to bring him in. He needs to feel that from us, I loved everything he said to me in those kinds of conversations. And the same with all those kinds of players that I have spoken to.

“I think that the manager-player conversation is really important because our relationship needs to be good and positive going forward.

“All you can do is do your best as a club because you know the competition is doing their best, so I think we can be happy that we have brought in players of their level. That is just how we tried to work.”

Werner and Havertz should feature in Chelsea’s Premier League opener at Brighton on Monday night, but Ziyech is out with knee trouble and Chilwell sidelined with the after-effects of a heel complaint.

Silva only started training at the weekend so the Amex Stadium trip comes too soon for the ex-Paris St Germain defender, but Christian Pulisic and Cesar Azpilicueta could feature on the south coast.

Chelsea’s new-look squad will require time to adjust and for the new recruits to bed into Premier League life.

Time has been in short supply across a staccato pre-season thanks to the continued coronavirus influence, with Lampard well aware his new faces will all settle at a different pace.

“I am pleased and now it is stage two; it is about getting them settled and playing to the best of their abilities,” said Lampard.

“We need to give them all a bit of time, the players that are coming in to hit the ground running.