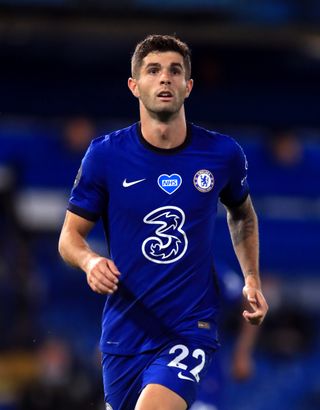 Pulisic fired 11 goals and laid on 10 assists in a fine first term with the Blues but ended his debut season on a sour note by tearing his hamstring in the FA Cup final defeat to Arsenal.

The 22-year-old excelled after lockdown in the protracted tail-end to the campaign and was duly handed the coveted 10 shirt after Willian joined Arsenal.

Pulisic came off the bench for his first appearance of the new campaign in Saturday’s 4-0 win over Crystal Palace, and now boss Lampard is excited to see the USA winger finally inch towards full fitness.

“I think Christian had a breakthrough season for us in the goals and assists, the highest he has made in his career,” said Lampard.

“So I think we are all excited about the levels Christian can go to.

“He had a bad injury. It was a grade two hamstring, which is difficult to come back from.

“He is champing at the bit and desperate to get back in the team.

“We managed to get 10 minutes today and we really want these next two weeks to be a real time to build up his fitness and get him ready for the next two games.

“He has earned the number 10 shirt for how he has played.”

Ben Chilwell fired Chelsea into the lead at Stamford Bridge after a goalless first half, before teeing up Kurt Zouma’s header with a smart cross.

Jorginho then netted two penalties as Chelsea took total control to claim their first home win of the new season.

And the 23-year-old revealed his excitement as Chelsea’s new-look squad starts to click.

“At half-time we spoke about needing to be a bit more creative and taking a few more chances in the attacking third,” Chilwell told Chelsea’s official club website.

“We know we have quality there and the second half we came out a bit sharper and scored four goals.

“I like the way we kept going at the end, we wanted more goals and showed a hunger to press for the whole 90 minutes.

“There hasn’t really been a pre-season, players are coming back from injuries and there have been a lot of different factors, not just for ourselves for all the teams, and it is going to take a few weeks for everyone to bed in together.

“We are working very hard on the training pitch and in this second half especially we showed that it is starting to gel together nicely.”

Roy Hodgson insisted he is already happy with his Palace squad ahead of Monday’s transfer deadline but did admit he is hoping to complete a deal for Nathaniel Clyne, who has trained with the Eagles after leaving Liverpool.

“There’s always a bit of anxiety because bids that are going to come in will be for players we absolutely do not want to lose.

“With Nathaniel, now it’s a question of meeting with his representatives and Nathaniel himself and seeing if there’s some sort of deal that will suit both sides.”