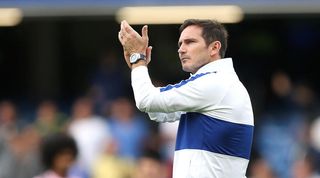 Chelsea manager Frank Lampard says his team must learn from Liverpool if they are to be successful in the coming seasons.

Lampard's side suffered a 2-1 defeat by the table-topping Reds at Stamford Bridge on Sunday, following a midweek loss to Valencia in the Champions League.

Liverpool have won each of their first six games of the Premier League season and have already amassed 10 more points than Chelsea.

The Blues are languishing in the bottom half of the table following their weekend loss, having won two, drawn two and lost two so far in 2019/20.

And Lampard believes his side, who are still awaiting their first home triumph of the campaign, must match Liverpool’s consistency if they want to challenge for the title in the next few years.

“It's definitely a concern and we want to win at home,” Lampard told reporters in his post-match press conference.

“Against Liverpool you know you can lose: they are a strong team and that can happen, and I expect the home win to come soon.

"The difference between us and Liverpool, as we have shown clearly today that we can compete with them, is that we aren't consistently as good as them and Manchester City week in, week out - and a lot of teams can say the same.

"To work towards those levels is hard. It’s a daily, daily thing and that's where we need to go now.

"The home win will come, hopefully it comes very soon and it will bring confidence to everybody, but we need to aspire to a level like Liverpool – when they probably don't play their best but they win the game.”

Chelsea host Grimsby in the third round of the EFL Cup on Wednesday, before a home clash with Brighton in the Premier League on Saturday.

10 players who came to the Premier League too early