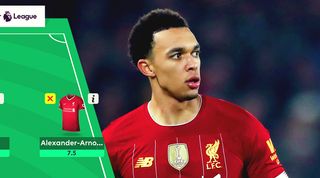 FPL is always a game of luck, chance and probability. You're more likely to win your league if you have the good players that the other teams don't have. That's a given.

But sometimes that's hard to avoid.

There are some players that are undroppable from Fantasy Football. Other players represent incredible bargains. And others are simply the only ones that we think going to play in that particular price bracket.

It perhaps comes as little surprise that Trent Alexander-Arnold is the number one pick on the game. What's a little more incredible is that over half of this season's FPL managers have chosen the Liverpool right-back in their team (a whopping 54.1%). But even for a defender, he's unstoppable - in fact, he's statistically the best value defender you can buy.

Timo Werner is second on the list (47.5%) and he's a little different to Trent. Sure, Chelsea's new signing is a proven goalscorer from the Bundesliga likely to tear up the Prem with some high-profile creators stocked behind him - but perhaps that £9.5m price tag is also persuading managers. This is a player could hit the ground running and rise by £2.5m before you know it - he's very similar to Pierre-Emerick Aubameyang really. The Arsenal captain in third - 43.7% of bosses have picked him - and he costs £12m.

Fourth and fifth respectively go to Fantasy favourites Kevin De Bruyne (31.9%, £11.5m) from Manchester City and Mohamed Salah (29.8%, £12m) from Liverpool, while Tottenham Hotspur's Son Heung-min is only just behind on 29%. Son is considerably cheaper at £9m than the other two, though will likely share goals with Harry Kane. The England captain is all the way down in 23rd.

FPL STATS The best-value outfield players to pick for your Fantasy Premier League team, according to statistics

Both priced at £6.0m, Fulham's Aleksandar Mitrovic (26.7%) and Spurs new boy Matt Doherty (26.2%) are just behind. Both offer good value for money in the game among much bigger names. The top ten is completed with Virgil van Dijk (25.5%, £6.5m and Danny Ings (25.2%, £8.5) - two players who moved in opposite directions between Liverpool and Southampton.

Remember that the deadline for Fantasy Football this season is on Saturday.

If you're still looking to build your team, we have all the help that you need - with a little thanks to @FantasyYIRMA, who have compiled the best bargain defenders, midfielders and attackers that you need for your side.

Of course, there are positional changes that you need to be aware of - we've got you covered on that front - while the best players available from promoted sides also need to be tracked.

And finally, your team name is the most important thing of all. We've got your back, again. Best of luck next season. Just don't be beating us, OK?