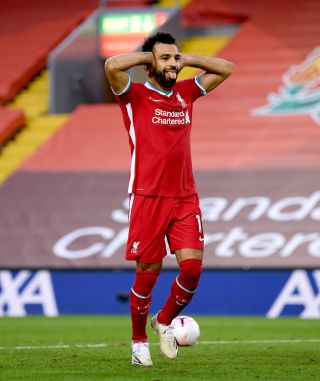 Gameweek one of Fantasy Premier League is in the books and managers will want to quickly work out what they can learn from the early action.

The FPL statistics include a Threat rating, measuring a player’s likelihood to score goals. It forms part of the game’s “ICT index”, combining influence, creativity and threat.

It is no surprise that Mohamed Salah‘s hat-trick in Liverpool’s 4-3 win over Leeds means top spot in the team and individual standings for the Egyptian and his team – but who else do the numbers point towards?

While no hard-and-fast conversion is offered on the FPL site, historical analysis shows that players would typically expect to score one goal for every 100 points of threat.

Salah was helped by two penalties as he significantly out-performed that ratio against Leeds, scoring three goals on 161 points of threat, though even that is by far the stand-out figure from gameweek one.

He more than doubled the second-placed total of 79 achieved by Chelsea new boy Timo Werner, who did not score against Brighton but was credited with an assist after winning the penalty from which Jorginho opened the scoring.

Sadio Mane contributed only two points for his 800,000-plus FPL owners, over 150,000 of whom have since transferred him out – but a threat score of 75, third best in the league, suggests they may be premature in doing so.

Salah’s score of 161 alone exceeded the threat rating of 10 teams, starting with rivals Everton on 160 – though the Toffees did provide one of the highest-ranking individual players with Richarlison fourth on 67.

The £8million Brazilian would seem to represent good value based on that early indication, and the same is true of Leicester’s Harvey Barnes and West Ham’s Michail Antonio, fifth and sixth in the threat rankings and costing just £7m and £6.5m respectively.

The top 10 is completed by Danny Ings, Pierre-Emerick Aubameyang, Callum Wilson and a three-way tie for 10th between Alexandre Lacazette, Andy Carroll and Raul Jimenez on 48.

Liverpool’s 385 points of threat is far and away the leading total of any team after one week, with Arsenal the next best on 232.

Leicester and West Ham follow on 211 and 209 respectively while Tottenham’s mark of 187 offers hope for their often high-priced stars after an opening blank. That figure was shared out among the Spurs line-up, with £5m defender Ben Davies surprisingly topping the list on 36, while Son Heung-min, Lucas Moura and Matt Doherty were just a point behind. Harry Kane was matched by Dele Alli on 21.

With Werner playing through much of Chelsea’s win with a dead leg, managers will be anxiously watching his status for gameweek two. The Blues amassed 150 points of threat, over half of which went to the German – the highest percentage share for any player of his team’s threat score.

Should he miss out, Tammy Abraham or Olivier Giroud would presumably be in line to benefit, though Liverpool represent an unappealing match-up. That is true despite the three goals conceded to Leeds, who managed only 98 points of threat.

Of the 16 teams in action in week one, Fulham rank last with 39 points of threat – barely one tenth of Liverpool’s total and barely half of the team nearest to them, West Brom on 70.