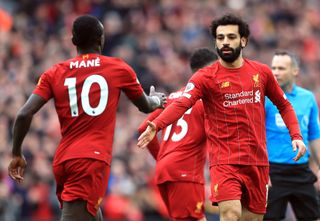 With just one Fantasy Premier League deadline left in the season, you’ll want to get your final picks and transfers right – but how can you be sure?

There’s no such thing as a sure thing in FPL unfortunately, but by analysing players’ performances against teams similarly ranked to their gameweek 38+ opponents, one can see who is expected to earn the biggest points returns.

The FPL ranks a team’s fixtures by their difficulty from one to five, with two being the lowest current rank given.

Liverpool’s final fixture of the season at Newcastle has been awarded a Fixture Difficulty Ranking (FDR) of two – in other fixtures with an FDR of two this season, two Reds do particularly well.

In 13 FDR two games this season Mohamed Salah has scored 10 goals and registered five FPL assists, clocking up a superb 8.85 points per appearance.

If the two play against Newcastle then, they could reasonably be expected to rack up 17 points between them. Give one of them the armband, and it could be the difference between winning and losing your mini-league.

It’s not only players at the big clubs that do well against FDR two opponents however, as West Ham’s Michail Antonio proves.

The 30-year-old midfielder averages 7.67 points per appearance in games with an FDR of two, which is how the Hammers’ fixture against Aston Villa in GW38+ will be rated.

Antonio’s numbers are improved somewhat by his four-goal return against Norwich recently, in which he notched a whopping 26 points.

However, the Englishman has also registered seven-point returns against Newcastle and Watford, and requires just one goal to reach what would be a personal best of 10 for the season.

Midfield the best form of attack

When it comes to working out whether to prioritise midfield or attack, midfielders are projected to score more heavily according to previous returns, as is reflected by our top six being comprised solely of midfielders.

Forwards Marcus Rashford, Pierre-Emerick Aubameyang and Harry Kane meanwhile are projected to score 7.45, 6.92 and 6.89 respectively in the final league game of the season based on their previous scores in similarly rated fixtures.

With that in mind, it could be a midfielder who saves your season rather than a forward.