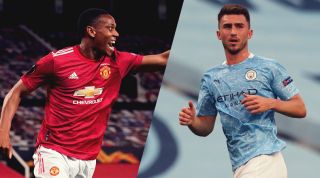 With both Manchester clubs returning to the FPL, the focus is on the returning stars ahead of GW2.

To help you decide who is worth backing, the lovely folks at PA has developed a Transfer Score metric, with a player’s form accounting for 50 per cent of the rating and the rest determined by cost, ownership and upcoming fixture difficulty rating (FDR).

Starting in defence, Aymeric Laporte at Manchester City and Victor Lindelof for Manchester United both register in the top three for defenders in terms of Transfer Score ahead of GW2. Laporte has a higher overall score than his defensive opponent, scoring well for cost (£6m) and differential ownership (5.3%) – but Lindelof is worth considering.

The United man is £1m cheaper than Laporte and is owned by just 2% of managers – with no fixtures ranked four or higher on the game’s FDR scale until December, that all combines to make Lindelof an enticing option.

Further up the pitch is where the battle of two FPL heavyweights takes place, as Raheem Sterling and Bruno Fernandes begin their 2020/21 Premier League campaigns.

Sterling’s score of 78 confirms he remains hot property, with his form from the back end of last season seeing him score a 99 on our chart.

Despite that, the £11.5m man is owned by relatively few managers at this stage, and far fewer than Fernandes. The Portuguese comes in £1m cheaper than his English rival, and while his form isn’t as good as the City man’s, it’s certainly strong enough to make him appealing.

The battle of the forwards however is between two players still looking to reinforce their credentials as FPL must-haves.

Both Gabriel Jesus and Anthony Martial score similarly – 68 v 66 – on the Transfer Score, with the former costing £9.5m and the latter £9.0m.

Both have similar form too, with Jesus averaging eight FPL points over his past five games and Martial 7.6, while the City man is a better differential option with lower ownership.

With Sergio Aguero as competition, however, Jesus might not see as many minutes as the United forward, who is more suited to playing anywhere across the front three.