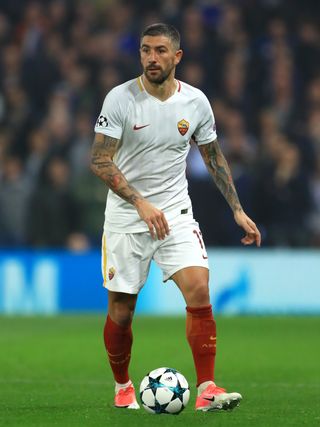 Aleksandar Kolarov has joined Inter Milan from Serie A rivals Roma for an initial fee of 1.5million Euros (£1.35m).

The deal for the former Manchester City defender includes potential bonuses worth up to 500,000 Euros.

Serbia international Kolarov scored 19 goals in 132 appearances for Roma after joining from City in the summer of 2017.

The 34-year-old, who won two Premier League titles and the FA Cup during his time at the Etihad Stadium, endured a fractious relationship with some Giallorossi supporters having played for bitter rivals Lazio between 2007 and 2010.

Details of his contract with Antonio Conte’s Europa League runners-up have not been announced.

Nicolò Zaniolo will undergo surgery on Wednesday after MRI scans today confirmed the player has suffered a complete tear to the anterior cruciate ligament of his left knee. The 21-year-old suffered the injury while playing for Italy against Holland on Monday evening. pic.twitter.com/lE41qaMQDs— AS Roma English (@ASRomaEN) September 8, 2020

The 21-year-old midfielder suffered a complete tear to the anterior cruciate ligament of his left knee while playing for his country against Holland.

Zaniolo, who was winning his seventh cap, was forced off in the first half of Monday’s 1-0 Nations League win in Amsterdam. It is his second ACL injury in eight months having had surgery on his right knee in January.