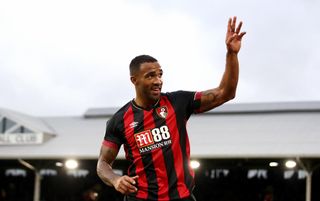 Bournemouth striker Callum Wilson is being watched by Manchester United as part of Ole Gunnar Solskjaer’s strategy to recruit young British players, according to The Sun. The United manager is also interested in England internationals including Borussia Dortmund’s JadonSancho, 19, and Leicester’s 22-year-old attacking midfielder James Maddison. Wilson, 27, has plenty of strike power of his own, having scored 17 goals since the start of 2018-2019.

The Manchester Evening News reports Nemanja Matic continues to be linked with a move away from Old Trafford. The Serbia midfielder is being targeted by Italian giants AC Milan, Inter Milan and Juventus. The Serie A sides are, however, only interested in signing the 31-year-old on a free transfer.

Cristiano Ronaldo has said he was just “one step away” from signing for Arsenal before making Manchester United his home in 2003. The Portugal striker told ITV’s Piers Morgan that he came “very close, one step away”, in comments carried by the Daily Mail. The 34-year-old told Arsenal fan Morgan that he was particularly appreciative of the efforts of former Gunners manager Arsene Wenger.

Norwich have received a boost with sporting director Stuart Webber to sign a new contract this week, The Daily Telegraph says. The 35-year-old has previously worked with Liverpool, Wolves and Huddersfield, and was significantly involved in Norwich’s recruitment of manager Daniel Farke in May 2017.

Liverpool are among the clubs hunting the signature of Napoli’s Fabian Ruiz, the Daily Mail reports. Anfield boss Jurgen Klopp got a good look at the midfielder during his side’s 2-0 defeat in Naples on Tuesday night, where Ruiz came close to scoring twice but was denied on both occasions by goalkeeper Adrian. The Spain international, 23, is also being targeted by Real Madrid and Barcelona so Klopp may not get his man.

Shevchenko’s son is future star at Chelsea's academy and could one day play for England https://t.co/KlzWEuUHA8— The Sun Football ⚽ (@TheSunFootball) September 18, 2019

Nathan Collins: The 18-year-old Republic of Ireland Under-19 defender could leave Stoke for Manchester United, according to ESPN.

Hugo Lloris: France Football reports the France goalkeeper says he is unlikely to finish his career at Tottenham and favours a move to the United States to play in the MLS before retirement.