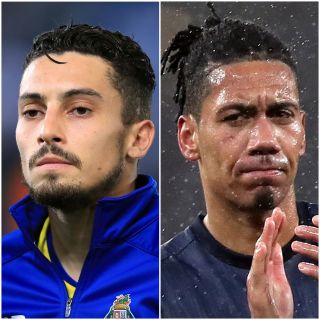 Alex Telles has made it clear he wants to leave Porto for the Premier League. The Daily Telegraph reports the Brazil left-back ‘has signalled his determination’ to shift to Manchester United. The 27-year-old has a £36.6 million release clause in his contract but will be free to foreign clubs from January, prompting Old Trafford bosses to attempt to secure him for less.

A successful loan spell at Roma has the Italian side preparing to make another bid for Chris Smalling, according to The Guardian. Manchester United have rejected an offer of £11m for the England defender, who spent last season in the Italian capital and who United believe is worth at least £18m. Roma manager Paulo Fonseca said at the weekend that the 30-year-old could join the Serie A team “in the next few days”.

The paper also reports West Ham will try to beat United for the signature of Wales centre-back Joe Rodon. But the Swansea defender, 22, may end up being too expensive for the Hammers.

The Sun, which cites France’s Le Parisien, says Liverpool are hoping to use Sadio Mane to convince his countryman Kalidou Koulibaly to join the Reds. Manchester City and Paris St Germain are interested in the Senegal international, who has made it clear he wants to leave Napoli. Mane is attempting to persuade the 29-year-old centre-back to make a home at Anfield, where he would be partnered with Virgil van Dijk.

Wesley Fofana: Sky Sports says West Ham have offered St Etienne £33m for the 19-year-old centre-back, who is also being targeted by Leicester.

Lucas Torreira: Atletico Madrid will make a bid for the Arsenal and Uruguay midfielder, 23, according to Spain’s Mundo Deportivo.