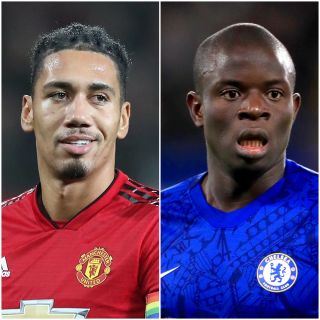 Chris Smalling‘s absence from Manchester United training has increased talk that he is preparing to leave Old Trafford after a decade. The former England defender, 30, had a successful spell on loan at Roma last season and the Serie A side are now negotiating to bring him across permanently, reports the Telegraph.

Inter Milan have made an offer for World Cup-winning midfielder N’Golo Kante but Chelsea have rejected it. The Guardian says the Blues rebuffed the Italians’ proposal, which included Croatia international Marcelo Brozovic in exchange, because they are not in a rush to sell the 29-year-old France player.

A former Chelsea defender could be returning to the Premier League from Russia, reports the Telegraph. West Brom are in talks to sign Branislav Ivanovic after the Serbia international left Zenit St Petersburg. The 36-year-old, who won three league titles and the Champions League with the Blues, is wanted at the Hawthorns on a short-term deal due to his experience.

The Evening Standard says striker Ben Woodburn will leave Anfield on a season-long loan to Dutch club Sparta Rotterdam. The Wales international has had injury-interrupted loans with Sheffield United and Oxford, with the 20-year-old journeying to the Netherlands on the recommendation of Liverpool’s Dutch assistant coach, Pepijn Lijnders.

Mbwana Samatta: The Daily Mail reports the 27-year-old forward is leaving Aston Villa despite only signing with the club in January, with Turkish media saying Besiktas will attempt to snap him up.

Florentino Luis: Fulham want to sign Benfica’s 21-year-old midfielder on a loan deal with an option to buy, according to The Sun