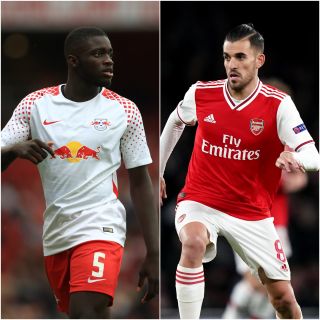 Manchester United are to make a further attempt to sign DayotUpamecano to bolster their defence, the Daily Mail reports. Upamecano, on the books of RB Leipzig, is said not to have a release clause in his contract, meaning Ole Gunnar Solskjaer’s side will have to spend big to land the 21-year-old.

Another player set to be on the move is DaniCeballos, who the Daily Mail reports will rejoin Arsenal for a second consecutive season on loan. The paper adds the Gunners will not be given an option to sign the Real Madrid midfielder permanently.

Chelsea are set to push their summer spending past £200million as Frank Lampard’s side are on the verge of completing a move for Bayer Leverkusen’s Kai Havertz, the Guardian says. Havertz, 21, will join up with new signings Thiago Silva, Timo Werner and Ben Chilwell for a fee of around £72m according to the paper.

Aston Villa will look to make a move for CallumWilson from Bournemouth after their chances of signing Ollie Watkins from Brentford faded, reports the Daily Mail.

Everton are keen to bring in JamesRodriguez and Allan over the summer as manager Carlo Ancelotti is looking for a reunion with both players, says the Daily Mirror.

Mesut Ozil: The Arsenal and Germany player has said he wants to remain at the Premier League club despite interest from clubs in Saudi Arabia and Qatar, reports the Daily Telegraph.

Christian Eriksen: The midfielder left Tottenham for Inter Milan earlier this year, and could be on the way out of the Serie A side according to Corriere dello Sport.

Conor Gallagher: Crystal Palace are set to make an offer for the 20-year-old to join on loan from Chelsea, says the Sun.