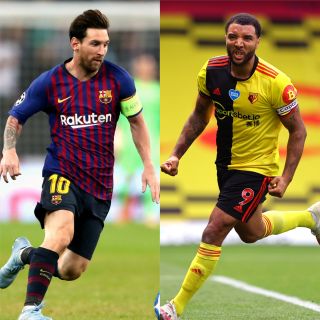 The Lionel Messi speculation continues at fever pitch, with Manchester City said to be ready to part with as many as four players to secure the 33-year-old. The Manchester Evening News says if City cannot secure Messi on a free transfer – a contractual matter still in dispute at Barcelona – they would offer Spanish defender Eric Garcia, 19, and Angelino, 23, to lower a transfer fee tipped to be around £200million. Spanish website Sport says City are prepared to offer £89.5m, plus Garcia, midfielder Bernardo Silva, 26, and forward Gabriel Jesus, 23. The Times says Messi phoned City manager Pep Guardiola last week to tell him he wants to leave Barcelona.

Troy Deeney has been offered to West Brom in a move designed to keep the veteran striker in the Premier League, the Daily Mail reports. The 32-year-old has been a Watford stalwart for 10 years but has said he is eager to stay in the top flight after Watford’s relegation. Club management have offered him to the newly-promoted Baggies, but their manager Slaven Bilic is said to be after younger players.

Tottenham have rejected a bid from AC Milan for defender Serge Aurier, according to Sky Sports. The 27-year-old has shone under Jose Mourinho, but may still be let go as Spurs chase Wolves defender Matt Doherty. Spurs and Milan, however, have some way to go before completing a deal for the Ivory Coast man, who joined Tottenham from Paris St Germain for £23m three years ago.

Manchester United and Tottenham are eyeing off 23-year-old Spanish left-back Sergio Reguilon, Marca reports. The 23-year-old Real Madrid player has shone on loan at Sevilla, playing a starring role in their Europa League triumph. United and Spurs are considering bids worth more than £20m, although they will face competition from Juventus and Inter Milan.

Leeds are set to bid for Lazio defender Luiz Felipe, talkSPORT says, citing Italian media reports. The 23-year-old Brazilian centre-back has had impressive season with Lazio and is at the top of Marcelo Bielsa’s list as he seeks to bolster Leeds’ defence on their return to the top flight. Leeds are set to offer £27m for Felipe, having been told Brighton’s Ben White is not for sale.

Kai Havertz: Chelsea are putting the finishing touches on their £90m move for the 21-year-old Bayer Leverkusen midfielder, according to The Guardian.