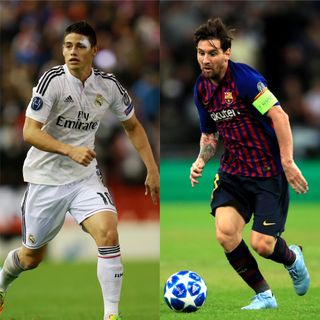 Europe’s biggest clubs are circling for Lionel Messi after he faxed Barcelona demanding a transfer this summer, with Manchester City, Manchester United and Paris St Germain reportedly heading the race to sign him. The Daily Mail says the Argentinian superstar made the request after crunch talks with new manager Ronald Koeman. The report said Messi is ready to use a disputed clause in his contract which allows him to move for free. City have been considered strong contenders to sign the 33-year-old, with manager Pep Guardiola having led him through several glorious seasons at Barca.

Everton are tabling an ambitious bid for Real Madrid’s Colombian attacker James Rodriguez, the Daily Mail reports. Carlo Ancelotti is said to be eager to reunite with the 2014 World Cup golden boot winner, having led him at Real Madrid and Bayern Munich. The 29-year-old Rodriguez has not quite hit the highs at Real, and the Spanish giants are willing to sell him with a year left on his contract.

Crystal Palace are poised to sign Queens Park Rangers midfielder Eberechi Eze, The Sun reports. Newly promoted Fulham and West Brom were keen on the 22-year-old, but after Fulham dropped out early due to pricing issues, Palace have now pulled clear of West Brom with a £14million bid which appears to have sealed the deal.

Manchester United are leading the race to sign Ajax midfielder Donny Van De Beek, the Manchester Evening News reports. United’s main priority remains Jadon Sancho, but with Jack Grealish now more likely to stay at Aston Villa after they avoided relegation, Ole Gunnar Solskjaer has turned his attention towards Van De Beek, who finished with 10 goals and 11 assists for Ajax this season. Real Madrid and Barcelona are also in the hunt, but the 23-year-old has a preference for the Premier League.

Chelsea are set to sign former Nice defender Malang Sarr, according to the Daily Express. The Frenchman is a free agent, and Frank Lampard is keen to lure him to Stamford Bridge as part of his aggressive summer recruitment drive following talks in the past few days. While Lampard is looking to veteran Thiago Silva to bolster his defence in a move from PSG, the 21-year-old Sarr represents more of a long-term option.

Thiago Silva: Paris St Germain are keen to offer the Brazilian defender an 11th-hour deal to stay, but he will undergo a medical at Chelsea on Thursday and that deal is almost done, Sky Sports reports.

Ollie Watkins: The 24-year-old Brentford forward could be off to the club that denied the Bees’ ascent to the Premier League, Fulham, Sky Sports reports.