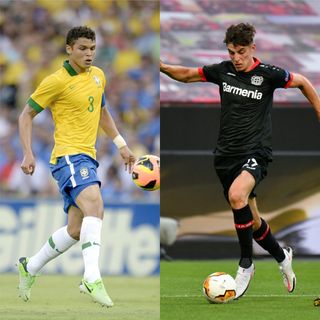 Chelsea are on the cusp of completing two major transfers, having agreed deals to sign Bayer Leverkusen midfielder Kai Havertz and Paris St Germain defender Thiago Silva, according to The Times. The Blues are set to spend more in this transfer window than any other. With Havertz all but secured on a deal that could rise to £90million, Ben Chilwell poised to join Chelsea from Leicester for around £50m, those two players and Silva are reportedly set to cost the Londoners more than £200m. Thiago is expected to decide his future early this week, the Evening Standard reports.

Everton are close to signing Napoli midfielder Allan for £31.5m, the Daily Express reports. An agreement has been reached between the two clubs, with Toffees boss Carlo Ancelotti keen to reunite with 29-year-old after their time together at Napoli.

Everton are set to offload Italian forward Moise Kean on loan to former club Juventus, Italy’s Tuttosport reports. The 20-year-old moved to Merseyside last year for £27.5m but has struggled to make a mark, scoring just twice all season. Everton are reportedly happy for him to gain playing time with Juventus’ reserves.

Wolves are poised to sign versatile Arsenal 22-year-old Ainsley Maitland-Niles, Sky Sports reports. Nuno Espirito Santo is eager to bolster his central midfield and full-back options, and believes Maitland-Niles can fit the bill in both departments. Wolves and Arsenal are in advanced talks over a four-year deal, with a transfer fee of around £20m.

Manchester United are set to dispatch goalkeeper Joel Pereira to Huddersfield on loan, according to The Sun. The Portuguese 24-year-old has has a season with Hearts and, rather than return to Old Trafford, where his opportunities will be limited by Dean Henderson’s return from loan to compete with David De Gea, Ole Gunnar Solskjaer would prefer Pereira gains playing time elsewhere.

Sead Kolasinac could be heading back to Germany https://t.co/PDzOVqqFXs— Mirror Football (@MirrorFootball) August 25, 2020

Nicolas Gonazalez: Leeds are interested in the 22-year-old Argentinian striker, but Stuttgart say he is going nowhere, according to the Yorkshire Post.

Luis Suarez: Barcelona are set to terminate the former Liverpool striker’s contract with a year to run as the 33-year-old is not in new boss Ronald Koeman’s plans, the Daily Mail reports.

Lionel Messi: The Barcelona great is the subject of interest from Inter Milan, Spain’s AS says.