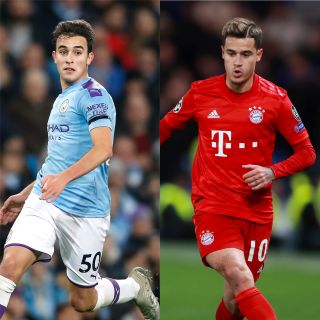 Barcelona’s shake-up is causing ripples throughout Europe, with new manager Ronald Koeman eager to sign a host of players including Manchester City’s 19-year-old centre-back Eric Garcia, Spanish website Sport reports. Koeman may also cause disappointment in England in seeking to keep Philippe Coutinho, who has been on loan at Bayern Munich and linked to Premier League sides including Arsenal, Tottenham and Leicester, according to Mundo Deportivo. Inter Milan forward Lautaro Martinez and Valencia and Spain full-back Jose Gaya are also said to be on Koeman’s wish list.

The Catalan giants have also put out feelers for Liverpool manager Jurgen Klopp, Sport reports. Jordi Farre, who is running for club president, has given his support to Koeman, but also said discussions had been held with Klopp. He indicated the German was also in the club’s thinking for the future, “because it seems to us that Barca need such a coach”.

Aston Villa are about to make a £30million bid for Celtic’s French striker Odsonne Edouard, The Scottish Sun reports. Villa have several options in mind as they seek to strengthen their squad after narrowly avoiding relegation, but the 22-year-old Edouard is their main target after bagging 28 goals last season. Leicester and Crystal Palace have also been linked to Edouard, while Arsenal appear to have dropped out of the race.

Lille centre-back Gabriel Magalhaes is signed and sealed for Arsenal, according to The Guardian. The Gunners’ move on the 22-year-old was suddenly rocked late last week by news of a potential late bid from Manchester United, while Manchester City had also been circling. However, Magalhaes is reportedly set to fly to London this week to complete a £27million move to Arsenal.

David Brooks: The 23-year-old winger might be on his way to Manchester United after relegated Bournemouth said they would not stand in the way of players seeking transfers, the Daily Mail reports.

Dimitris Giannoulis: Newcastle are after the 24-year-old left-back, putting a £4.5m offer to to Greek club PAOK for his services, according to Sports Lens.

Zlatan Ibrahimovic: The 38-year-old is yet to sign a new contract with AC Milan, and will be a free agent at the end of this month, Gazetta dello Sport says.