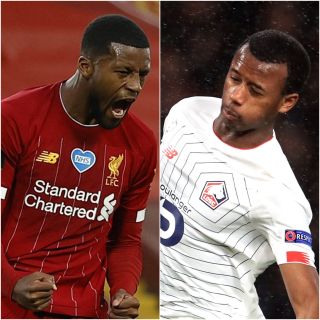 New Barcelona manager Ronald Koeman has marked Liverpool midfielder Georginio Wijnaldum as a prime target for the Spanish giants. Citing a report in Algemeen Dagblad, the Daily Express says Koeman has a strong relationship with the 29-year-old from their time together with the Dutch national team and has asked Wijnaldum not to sign a new deal with the Reds.

Arsenal’s pursuit of Lille defender Gabriel Magalhaes has been thrown a curve ball, courtesy of a potential late bid by Manchester United. The Daily Telegraph reports that, while the Gunners remain in pole position for the 22-year-old, Gabriel is believed to have delayed his decision in anticipation of a £22.6million bid from United.

Staying with United, the Manchester Evening News says the club has lost interest in a loan deal for Juventus winger Douglas Costa. Instead, the paper reports United are considering a move for Bournemouth midfielder David Brooks.

Liverpool are believed to be interested in Bayern Munich midfielder Thiago Alcantara. According to The Independent, Reds manager Jurgen Klopp is a big fan of the 29-year-old, while Alcantara is reportedly “enthused” about a move to Anfield.

Meanwhile Arsenal’s Ainsley Maitland-Niles could soon be calling the Tottenham Hotspur Stadium home. The Daily Mail says Tottenham are set to make a £20m offer for the Gunners defender as doubts grow over Serge Aurier’s future at the club.