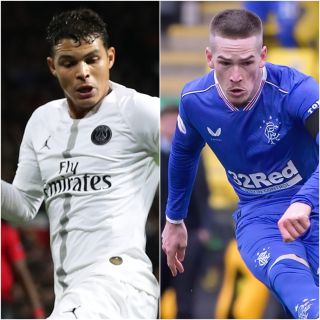 Paris St Germain centre-back Thiago Silva has been offered to Chelsea, the Daily Telegraph reports. The Brazil international will leave the Ligue 1 champions following Sunday’s Champions League final. The 35-year-old could be a significant addition for Frank Lampard’s defence, though AC Milan and Fiorentina have also shown interest.

Leeds are believed to be on the verge of making a £10million bid for Rangers’ winger Ryan Kent, according to The Sun. The paper says manager Marcelo Bielsa is extremely high on the 23-year-old and is determined to make him a key part of Leeds’ Premier League plans.

Manchester United may be open to offering up goalkeeper Sergio Romero to Aston Villa as part of a swap deal for England midfielder Jack Grealish. The Daily Mail says the move would then leave Dean Henderson and David De Gea to battle it out for the number one spot.

The Mail also reports Wolves are willing to listen to offers for winger Adama Traore, despite the 24-year-old having three years left on his contract. Although the club is under no pressure to sell Traore, they are not believed to have entirely discounted the idea – providing the right deal comes along.

Liverpool are said to be prepared to sell midfielder Marko Grujic and winger Harry Wilson in the summer in order to raise some funds. According to the Daily Mirror, the club are hoping for the duo to boost their coffers by around £40million.

Gareth Bale: Jose Mourinho wants to bring the 31-year-old back to Tottenham, according to Spanish outlet Cuatro.

Federico Bernardeschi: Chelsea and Atletico Madrid are keeping an eye on the Juventus winger, reports Calciomercato.