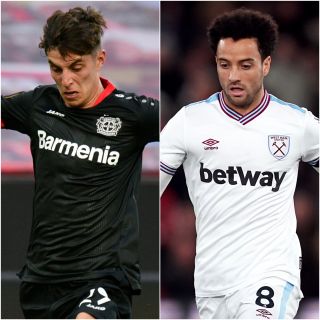 Just a day after reports emerged that Bayer Leverkusen were refusing to budge on their £90million asking price for Kai Havertz, Chelsea are believed to be looking to finalise a deal for the midfielder within the next 10 days. Citing a report in Bild, the Daily Express says the Blues are desperate to secure the 21-year-old before Leverkusen return to training on August 28, and are willing to pay up to make it happen.

Lazio have reignited their interest in West Ham midfielder Felipe Anderson, according to the Daily Star. The Italian club had originally dropped their interest in the 27-year-old in order to pursue David Silva. However Silva’s decision to join Real Sociedad has forced Lazio to visit alternatives, with Anderson believed to be leading the way.

Watford have reportedly rejected an offer from Everton for midfielder Abdoulaye Doucoure. The Evening Standard says Watford are holding firm on their £25million valuation for the 27-year-old, with the Toffees’ initial approach falling short. Everton are expected to come back with another bid.

The Daily Mail reports Chelsea are keen to commence contract talks with in-demand midfielder Conor Gallagher. Crystal Palace, Newcastle, Leeds and Aston Villa are believed to be among the 20-year-old’s suitors following an impressive season on loan at Swansea. However the Blues are currently inclined to send Gallagher out on loan again rather than sell him.

Norwich are homing in on West Ham striker Jordan Hugill, according to the Mail. The paper says the Canaries view the 28-year-old as a key figure in their summer overhaul as they plan a return to the Championship.

Man Utd could be closing in on their man https://t.co/1B8Sqbeii1— Mirror Football (@MirrorFootball) August 18, 2020

Gabriel Magalhaes: ESPN reports Arsenal are confident of securing the Lille defender on a £22m deal.

Paulo Dybala: The 26-year-old may be used by Juventus as part of a swap deal with Manchester United for Paul Pogba, according to Tuttosport.

Douglas Luiz: Despite being linked with Manchester City, the Express & Star says Aston Villa are confident of keeping the midfielder at Villa Park.