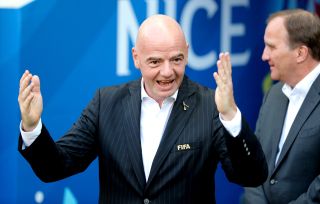 Criminal proceedings against FIFA president Gianni Infantino have begun in Switzerland over meetings he held with the country’s attorney general.

A special federal public prosecutor, Stefan Keller, was appointed last month to examine complaints made in relation to the meetings in 2016 and 2017 involving Infantino, attorney general Michael Lauber and the chief public prosecutor for the Upper Valais region, Rinaldo Arnold.

He has concluded that “there are indications of criminal conduct” in relation to the meetings.

Infantino and FIFA say they will co-operate fully with the investigation, with Infantino insisting he was trying to assist Lauber with the attorney general’s investigation into historic corruption.

The FIFA president was asked about the meetings with Lauber at the world governing body’s Council meeting in June, and said: “To meet with the Attorney General of Switzerland is perfectly legitimate and it’s perfectly legal.

“It’s no violation of anything. On the contrary, it is also part of the fiduciary duties of the president of FIFA.”

The first meetings with Lauber occurred in 2016, just after Infantino had been elected as president and in the aftermath of the corruption scandal which engulfed FIFA under Infantino’s predecessor Sepp Blatter.

Lauber’s office was investigating that scandal, in which FIFA was being treated as a victim rather than a suspect.

Infantino said there was a “mountain of questions” regarding those investigations, and added in June: “It’s legitimate to offer to contribute to the Swiss attorney general about the clarification of these events, hoping that those who have done criminal acts and damaged FIFA will be held to account for that.”

The statement from the supervisory authority for the office of the attorney general said the meetings had generated concerns of abuse of public office, breach of official secrecy, assisting offenders and incitement to these acts.

Infantino added on Thursday: “As president of FIFA, it has been my aim from day one, and it remains my aim, to assist the authorities with investigating past wrongdoings at FIFA.

“FIFA officials have met with prosecutors in other jurisdictions across the world for exactly these purposes.

“People have been convicted and sentenced, thanks to FIFA’s co-operation, and especially in the United States of America, where our co-operation has resulted in over 40 criminal convictions.

“Therefore, I remain fully supportive of the judicial process, and FIFA remains willing to fully co-operate with the Swiss authorities for these purposes.”