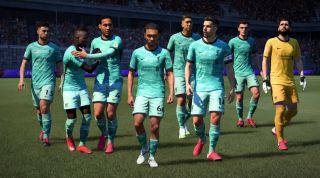 With less than two months until FIFA 21 is released, more details about the game are coming out – with massive updates now revealed.

One of the most exciting areas for development is the beloved Career Mode, which is seeing big upgrades this season. Now, with reworked Interactive Match Simulation, Player Position Conversion and training among other things, you can have even more control over your club than ever.

Plus, with FIFA 21, you don't have to pay extra for a new copy of the game, should you choose to upgrade your PlayStation or Xbox when the new machines hit shelves. Handy, right?

Interactive Match Sim is perhaps the biggest new change to the old format. You no longer have to stay sat on the bench during a game, as you can jump in and out of the match - yes, that is very cool, we hear you - as you can adopt a more tactical, faster-pace approach to matches to make better decisions.

There are also new tabs available for organising your side: Fitness, Player Ratings, Match Stats and Game Plan, to stay totally on top of everything a manager may need to consider. The new Match Launcher includes a Probable Opponent Line-Up alongside your active Team Sheet, so that you can work out how worth your time this fixture is.

Player Development is improved too - your team can be developed and specialised in various roles and the attributes that best fit your style of play. As your players are developing too, there's no longer any need to waste XP on attributes you’re not interested in growing.

Instead you can grow Major Attributes, Skill Move/Weak Foot ratings, attacking/defensive work rate and attributes that fuel specialisation. So rather than training Phil Foden how to tackle, you can instead turn him into a Neymar-level entertainer (we think). Neat.

FIFA 21 NEWS Release date, preorder, cover, trailer, demo – and everything else we know so far

Training also sees some tweaks for the upcoming season. A Training Day will feature three training session slots, each with a Drill and specific players. Multiple players can now participate in each Drill - that's up to 15 players in each Training Day - and training days will always be pre-populated with the necessary Drills and players based on the active Team Sheet.

Of course, you can always take control and edit them as you wish. Great news for Unai Emery, who will likely instruct his team to just cross all morning, every morning.

This all plays into Sharpness - an all-new indicator that helps show how ready a player is for a match. A sharp player will have their main Attributes boosted and will perform better on the pitch, meaning that it's more realistic next time Harry Kane is easing himself back from some time out, for example.

There's a Player Feedback System added to the Team Management screen, so you can see the most relevant information to you, and with Team Schedule Planning, you can now control what your players do every day of the season in order not only to build their match Sharpness but also to manage their Fitness levels and Morale.

If that's not enough, there are also changes in the boardroom: it's like the Barcelona hierarchy, right now.

You can now Loan to Buy to alleviate risky transfers, there are AI Player Swap Proposals to help suggest deals that make sense and there are new Contract Renewal Improvements - the AI-controlled clubs will now perform contract renewals based on how a player's performing, so you will see fewer top, top players become Free Agents. It can still happen in some cases, though. Just look at David Silva.

There's also Expanded Competition UI - nice screens for specific tournaments - and players start retiring later to 40. Thanks, Cristiano, for completely altering the timeline of how long a world-class player should perform.

Established Youth Academies mean that you don't have start from scratch building one, Financial Takeover Setup ensures that you can essentially bankroll yourself with billions while Loan and Transfer Negotiations improvements put a little more common sense into the hands of players - a dangerous thing indeed - because really, it makes no sense for the world's best CDM to go to a club playing 4-4-2 with no designated CDM.

All in all, this version of FIFA is shaping up nicely. If you preorder now, you will be entitled to a Homegrown Talent player as part of your Youth Academy. When you create your Career Mode save, one player with high potential will await you in your academy, with news stories around his performance will calling out his upbringing as a local lad that loves the club.

Yes, EA are offering you your very own Jack Grealish if you buy now.