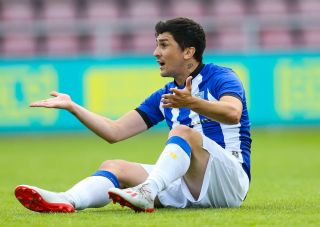 The incident happened during a pre-season friendly last July between Wednesday and Mansfield, with Forestieri’s comments made towards Stags defender Krystian Pearce sparking a brawl on the pitch.

Forestieri was acquitted in March at Mansfield Magistrates’ Court of racially abusing Pearce, but was then subsequently charged by the Football Association in June.

Fernando Forestieri will be unavailable for Sheffield Wednesday’s next six matches after an appeal against a proven breach of FA Rule E3(2) was dismissed by an Appeal Board. Full statement: https://t.co/lU0BXgNnQp. pic.twitter.com/xon6kNuJTC— FA Spokesperson (@FAspokesperson) September 5, 2019

The commission deemed the case against Forestieri proven on a lower burden of proof than the criminal proceedings. The 29-year-old was also given a £25,000 fine, warned as to his future conduct and ordered to attend face-to-face education.

The sanctions had, though, been set aside with Forestieri given the right to appeal, which he immediately announced he would be doing.

However, on Thursday it was confirmed the forward would now serve his suspension.

“Fernando Forestieri will be unavailable for Sheffield Wednesday’s next six matches after an appeal against a proven breach of FA Rule E3(2) was dismissed by an Appeal Board,” a statement from the FA read.

“Words used by the striker during a friendly fixture against Mansfield Town FC on 24 July 2018 were deemed to have breached Rule E3(1) as they were abusive and/or insulting and constituted an ‘aggravated breach’, which is defined in Rule E3(2), as they included reference to ethnic origin and/or colour and/or race.

“He was also fined £25,000, warned as to his future conduct and must attend face-to-face FA education.

“The Appeal Board’s written reasons will be made available via TheFA.com in due course.”

When the original decision was announced, Forestieri said he was “devastated and disappointed”, going on to protest his innocence at great length, adding he had felt “vindicated by the decision of the judge”.

He said at the time: “I am not and never will be a person or a footballer who says offensive things by reference to race to my colleagues or other players, either on or off the pitch.”

“Sheffield Wednesday acknowledge the decision today of the Appeal Board regarding Fernando Forestieri,” the club statement read.

“We further acknowledge that Fernando will be unavailable for the next six first team fixtures.

“The club and the player remain extremely disappointed with the findings of the Regulatory Commission and the Appeal Board when Fernando was acquitted in relation to the same incident in a court of law earlier this year.

“Both parties will be making no further comment at this time.”

Forestieri had already served a three-match suspension for misconduct relating to the brawl.

Forestieri made four appearance for the Owls this season while the appeal was being heard but the forward is now set to be unavailable to caretaker manager Lee Bullen until mid-October.