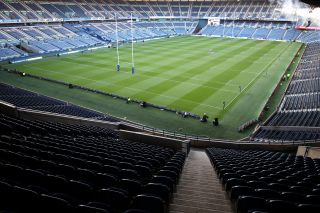 Sports fans will return to grounds in Scotland next Friday when Edinburgh host Glasgow Warriors at BT Murrayfield.

The Scottish Government has approved plans to hold a test event for the final Guinness PRO14 game of the regular season for both teams.

It is understood about 1,000 people will be present at the stadium, which has a 67,000 capacity. That number will include players, backroom staff, stewards, other operations staff and journalists.

The Scottish Rugby Union’s chief operating officer, Dominic McKay, said the governing body was delighted that a “limited number of spectators” will be present.

Pleased to share this welcome news. Thanks to the @NicolaSturgeon@jasonleitch@JoeFitzSNP and their teams for supporting this important initiative for restarting the sporting and live event industry. #AsOnehttps://t.co/PjzAjWVWPI— Dom McKay (@dom_mckay1) August 21, 2020

He added: “We are pleased our work with the Scottish Government will ensure that players, support staff and fans will be covered by a comprehensive event plan for everyone’s safety including physical distancing requirements.

“Scottish Rugby would like to thank Government ministers and officials who have helped us make this happen, and our own colleagues who pulled together a robust operational plan for the match.

“We hope that our experience and learnings from a live spectator event next Friday can help all of Scottish sport, and the wider events industry restart.”

The test event comes ahead of an indicative date of September 14 for supporters to be allowed back into sports stadiums in Scotland under the government’s plans for easing coronavirus restrictions.

Scottish football has also been pushing for test events with Celtic’s home clash with Motherwell on August 30 put forward as a potential rehearsal for wider implementation.

Scottish Premiership clubs are producing documentation that they hope will help facilitate the gradual return of supporters within each of their grounds, looking at access points and physical distancing measures.

Scottish Professional Football League chief executive Neil Doncaster said: “Discussions on pilot events at Premiership matches are now under way and everyone is determined, for the sake of the Scottish game as a whole, to ensure these go smoothly and safely.”

Meanwhile, the Scottish Football Association has announced it is formally lifting the suspension of football from August 24, in line with First Minister Nicola Sturgeon’s announcements on Thursday. Contact training can resume for clubs outside the Scottish Premiership, who had been allowed special dispensation.

We spoke to Professor @jasonleitch, National Clinical Director for @ScotGov, about the impact the latest Phase Three update would have on the Return To Football.— Scottish FA (@ScottishFA) August 21, 2020

The decision confirms plans for lower-league teams to return, including Hearts, who were told to halt their pre-season programme after breaches of protocol from Celtic and Aberdeen players sparked government concern.

SFA president Rod Petrie said: “This is a significant and hugely positive step forward for the whole of Scottish football and means that training can resume for both the professional and grassroots game from Monday.

“I understand the sacrifices players, coaches and clubs have been forced to make to get to this point but the health of the nation remains our absolute priority.

“Training can resume on Monday in line with government’s ongoing social distancing measures and advice and, if the virus continues to be contained in Scotland, then the path to competitive football matches being played by October is tangible.”