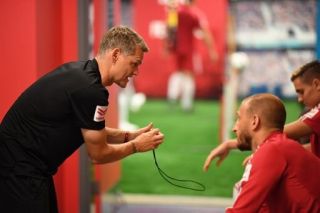 The 43-year-old has been serving as the assistant coach under American Chris Armas since March 2017, but Carnell has since taken over the helm after the sacking of Armas.

Armas was shown the door by the Red Bull on Friday following a poor run of results, during which the team managed to secure only one win in their last six league outings.

The Metro have since released a statement confirming that Carnell will serve as the caretaker coach:

'Carnell, a former South African international, was named as an assistant coach on March 28, 2017.

'Carnell's first match as interim head coach will be on Sunday, September 6 [Monday, 7 September at 1am SA Time] against the Philadelphia Union at Red Bull Arena.'

Speaking on his appointment, Carnell said: 'It’s been a whirlwind and emotional rollercoaster and we know we valued Chris and CJ. What happened came as a shock to everybody, but I now have an obligation to the team, to the club, who brought me in 2017 and I have an obligation and our biggest assets right now are the players.

'We’ve had a good chat this morning and we said what’s most important is to hit the ground running, you know, the dust has settled and things in this business go pretty quickly and there’s no time to rest on what was and now we’re going to focus on the future, which starts on game day.'