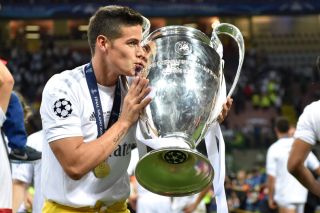 James Rodriguez could team up with Everton boss Carlo Ancelotti for a third time in his career this summer, with the Colombian linked with a move to Merseyside.

Ancelotti signed James when he was Real Madrid manager in 2014, and later brought him in on a two-season long loan at Bayern Munich in 2017.

Now, talk has picked up of a move to Everton, with Talksport reporting that both a permanent move or a loan move could be on the cards.

James, who plays as an attacking midfielder or winger, only made eight La Liga appearances last season, and has a year left on his contract in Madrid.

Still only 29, he drew the second-highest transfer fee in Portuguese football history when he moved from Porto to Monaco in 2013, and after a brilliant 2014 World Cup in Brazil – including a wonderful volley against Uruguay – he moved to Real Madrid. The fee was around £63 million, which was then the fourth-highest transfer fee of all time.

A move to Everton would likely be considerably cheaper for the Toffees, although some claim the fee could still be around £35m. James is clearly not in Zinedine Zidane's plans at the Bernabeu, and has previously spoken about how a move to England would interest him – despite links to a move to the MLS with David Beckham's Inter Miami project.

"I've already been in several good leagues and the only thing missing is Serie A and the Premier League, you have to see where I want to go or where they want me to go," James has said.

"Going to England would be a good thing, it's a top league."

A move to Everton has also been raised directly with Ancelotti back in July.

“When I left Madrid, James Rodriguez followed me to Munich. He came to play. But he followed me as a rumour to Napoli and now he is following me to here Everton as a rumour. I have to be honest – I like him a lot.”