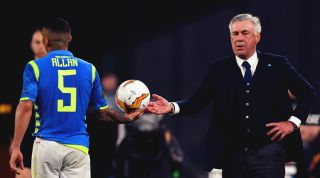 Everton are stepping up their efforts to sign Napoli midfielder Allan, according to reports - but the Brazilian will cost the Merseysiders upwards of £30m.

Carlo Ancelotti is keen to bolster his midfield this summer, having identified a number of targets. The Toffees missed out on Southampton's Pierre-Emile Hojbjerg after Tottenham Hotspur sealed the signing first - but that hasn't stopped Everton looking further afield.

Allan comes with plenty of European experience, and like Hojbjerg, he is excellent at breaking up play. He can play either in a double-pivot or in a midfield three and has shone under Maurizio Sarri, Ancelotti himself during a brief spell in Naples, and lately under Gennaro Gattuso.

Napoli, however, are demanding over £30m for the 29-year-old. He apparently has two years left on his contract, meaning the Serie A outfit are not desperate to sell.

Doucoure had a poor season at Vicarage Road but is still highly regarded. The Frenchman's boundless box-to-box energy is complemented by a good technical ability and plenty of Premier League clubs have been linked with him in the past, including Arsenal and Manchester United.

It's likely that Ancelotti will land one of his favoured two targets - or both. Should he fail to sign either though, Jefferson Lerma of Bournemouth could be in the frame, for his tough tackling style, though his woeful disciplinary record is a worry. The Colombian averaged almost a yellow card every other game in the Premier League, and though he undoubtedly has quality, he isn't the most reliable.

While Gueye has gone on to win Ligue 1 and reach a Champions League final with PSG, Everton have missed his grit in the centre of the park, especially when operating with Ancelotti's favoured 4-4-2. Replacement Fabian Delph has put in some good performances, while Tom Davies is still developing and club-record signing Gylfi Sigurdsson has had an adaptation period to being used deeper on the pitch.

Everton would love to upgrade their midfield options, but remain open to improving other areas of the squad. Diogo Dalot, Bertrand Traore and namesake Everton Soares have all been linked to add depth to the flanks, while Sergio Romero and Ben Foster have been touted as replacements for the erratic Jordan Pickford.