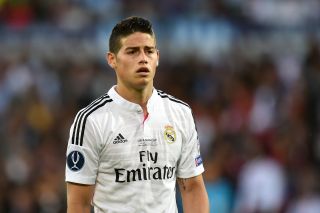 James Rodriguez has been reunited with Carlo Ancelotti for a third time after Everton announced the signing of the Colombian from Real Madrid on a two-year deal, with the club having the option of a third season.

The 29-year-old was brought to the Bernabeu shortly after his starring role at the 2014 World Cup by Ancelotti, who then linked up with the playmaker three years later when Bayern Munich signed the player on loan.

Rodriguez spent two years with the Bundesliga giants before returning to Real, where he made just 14 appearances in all competitions last season, clearly surplus to requirements under head coach Zinedine Zidane.

He has become the Toffees’ second summer signing – after Brazil international Allan, who also worked under Ancelotti when they were at Napoli.

“I am really, really happy to be at this great club, a club with so much history, and here with a manager who knows me really well,” Rodriguez told evertonfc.com.

“I’m looking forward to achieving great things here – and winning things, which is what everyone’s aim is.

“I’ve come here to try to improve, to get better. I’ve also come here to help the team to win, to play good football – entertaining football.

“I’m convinced, with Carlo and his technical staff, we can achieve big things and one of the big reasons (I signed) was the presence of Carlo Ancelotti.

“I have enjoyed some great times with him previously at two different clubs. That was a massive reason to come here.”

Rodriguez won the Golden Boot at the World Cup six years ago before joining Real, where he made 125 appearances in his two stints and helped the club win LaLiga and the Champions League, both twice.

He also was part of Bundesliga-winning sides in the two campaigns he was with Bayern before heading back to the Spanish capital, where he made just eight appearances in LaLiga, five of them starts.

“I’m a winner, I’m a real winner,” Rodriguez added. “I can see the plans here, the project here is very serious. Everyone means business.

“I think the seriousness and determination to win trophies can lead to silverware.

“I can see, too, these fans are real, true supporters. I hope we can have a good, positive, mutual feeling between ourselves. What they can be sure of is I am going to give everything in every game situation.

“I have sensed that good feeling right from the very start, and it is excellent.”

Ancelotti added: “James, as everyone knows, is a fantastic player with a lot of quality and a lot of ability to make assists for the strikers.

“He’s really excited about the project of the club and the fact we want to improve. He was really excited to sign and I didn’t spend time to convince him – he was already convinced.

“Players like James and Allan can help us to be better and we can help them to be better. This kind of connection can be helpful to improve the results, the team and results of this club.”