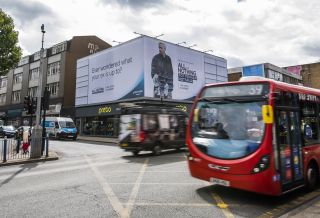 A billboard featuring Jose Mourinho has been put up near Chelsea’s Stamford Bridge stadium to advertise the forthcoming Tottenham documentary.

The All or Nothing series on Amazon Prime Video followed Spurs during the 2019-20 campaign and the first three episodes drop next Monday.

The streaming site is upping its promotion of the series and is hoping to get some attention with the location of a billboard in Putney High Street.

We’ve let some of the @SpursOfficial boys take charge of their own #AllOrNothingSpurs photoshoot…— Amazon Prime Video Sport (@primevideosport) August 24, 2020

It features former Chelsea manager Mourinho with the caption, ‘Ever wondered what your ex is up to’.

The fly-on-the-wall documentary will begin with Mourinho’s arrival at the club less than 24 hours after Mauricio Pochettino’s sacking and is likely to feature Harry Kane’s serious injury, Christian Eriksen’s exit, Eric Dier climbing into the stands to confront a fan and Hugo Lloris and Son Heung-min’s spat on the pitch.

There will also be a focus on the club’s community work and how they responded to the shutdown of the Premier League due to coronavirus.