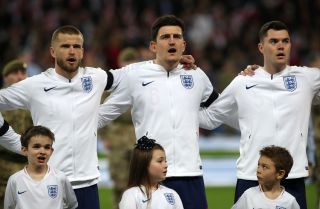 Eric Dier has given his full backing to England team-mate Harry Maguire, though admits the pair have not spoken about Tottenham’s 6-1 hammering of Manchester United.

Dier was in the Spurs team that handed down United’s joint heaviest Premier League defeat at Old Trafford last week, a game that Maguire came out of with heavy criticism after being exposed for a couple of goals.

The pair look set to be in the same side on Sunday as England host Belgium in the UEFA Nations League, with Maguire returning to the fold after being dropped last month following his legal case in Greece.

Dier is full of admiration for the United centre-half and says his record for England cannot be questioned.

“I can’t really speak on the criticism after the game, I don’t pay any attention to that and it is not my business but he is a fantastic player,” the Spurs defender said.

“To play for Man Utd and play for England and to have played to the standard he has for both… and what he has done for England as well, the impact he has had on the team since he arrived with England and the way he played at the World Cup and since then, he has shown fantastic consistency. He is a very important player for both teams.

“For me it is a pleasure to be with him, the last camp he wasn’t here, but he is someone I respect a lot as a player and person as well.”

It could have been awkward when the players all met up on Monday, 24 hours after Spurs’ win, but Dier insists the relationship with their players and the United contingent is strong.

“I have been in that place, coming into international camps after losing to players in the team the game before,” he added.

“Personally and all the Tottenham players have a good relationship with Marcus (Rashford) and Harry and nothing changes that.

“I have a lot of respect for them as players. That’s the game and every player goes through something like that.”

Another player who has been criticised lately is Dele Alli, who has fallen out of favour at Tottenham under Jose Mourinho.

Alli has been off the international scene for over a year, but Dier is confident his close friend can make it back.

“Of he course he can, I wasn’t in it for a year and a bit myself, so I think it is definitely possible,” Dier added.

“Someone with his quality and what his attributes are, he is still a fantastic player, you don’t lose that overnight and he is going through a difficult time, it is no secret to anyone, but as footballers, there is always going to be moments like these. Everyone has them in their careers and Dele has got a fantastic personality.

“I am sure he is going to get down to work and put his head down and try and get back where he was a year ago or so.

“It is really in his hands and I am looking forward to seeing his reaction over the next couple of months and I am sure he is going to be highly motivated.”

Meanwhile, Dier believes Marcus Rashford can inspire other footballers to stand up for a cause in the wake of receiving an MBE for his efforts in helping secure free meals for vulnerable children during the coronavirus pandemic.

“This morning we had a team meeting before training like we normally do and the manager gave a speech on everything that Marcus has done and congratulated him and we gave him a round of applause which he fully deserves and more,” Dier said.

“It is a fantastic achievement for him and as the manager has said it is an honour for him to have received the achievement but what he is doing is so much more than that.

“For him to put everything into a cause that is so close to his heart and to have the affect he has had on it and for him to affect change in the way he has, he is a fantastic role model for not only kids but us as players as well.

“What Marcus has shown I think will show players that we can all have in affecting change in a positive way in a subjects that matter dearly to us.”