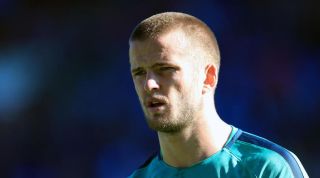 Manchester United have included Eric Dier and Lucas Moura on their transfer wish list for the next 12 months.

According to the Daily Star, Ole Gunnar Solskjaer has identified the Tottenham duo as key targets as the Norwegian attempts to strengthen his squad in both the January and summer windows.

Neither Lucas nor Dier is a regular starter under Mauricio Pochettino, and United hope that they could tempt the pair to Old Trafford with the promise of frequent first-team minutes.

Dier missed Spurs’ pre-season tour of Asia due to injury, although he has since resumed full fitness.

The midfielder is still awaiting his first Premier League appearance of the season, however, having been an unused substitute in five of Tottenham’s first six games in 2019/20.

Lucas has been more involved than his team-mate, but the Brazil international has still been afforded just two starts in the top flight this term.

The former PSG forward was controversially left out of Pochettino’s XI for the Champions League final in June, despite scoring a tie-changing hat-trick in the semi-final clash with Ajax.

However, Lucas signed a new five-year deal with Tottenham in July and chairman Daniel Levy is likely to drive a hard bargain if United attempt to prise him away from the north London outfit.

It is thought that Spurs would not entertain any bids below £50m for the Brazilian attacker.

United have also been linked with Jadon Sancho, Callum Wilson and James Maddison in the last few weeks.

Solskjaer targeted young British players in the summer transfer market, signing Daniel James from Swansea, Aaron Wan-Bissaka from Crystal Palace and Harry Maguire from Leicester, and is keen to continue with that policy.

The Red Devils have not won the Premier League title since Alex Ferguson's retirement in 2013, and Solskjaer is determined to build a squad capable of challenging Manchester City and Liverpool at the top of the division.

10 players who came to the Premier League too early