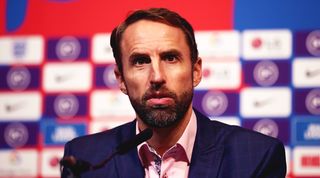 England manager Gareth Southgate has thrown down a gauntlet to his squad, telling them after so long without an international match, it's up to them to convince him of their place in the team.

Speaking on the Zoom press conference following his first England squad announcement since COVID-19, much of the talk surrounded Manchester United captain Harry Maguire, whose trial in Greece is ongoing. There was plenty more to be discussed, however, with first-time call-ups for three players, along with who will take the No.1 shirt.

Speaking to FourFourTwo, Southgate referenced the long break, mentioning that the halt in momentum for England will be felt by every international side across the continent.

"I think we’ve had a period of 10 months without a game," he said. "And within that period there’s been various fluctuations with form, across every position."

"Although we had great momentum before the break, I think for every international team, that momentum stopped."

"And we’ve got to find a way of, you know, restarting the team, reconnecting with the team, getting back up to speed with how we work and there’s competition for places in every position on the pitch."

One particular area of contention right now is in goal. England's heroic keeper from the 2018 World Cup, Jordan Pickford has been in subpar form for his club, Everton, for a while now, while the emergence of United's Dean Henderson last season, on loan at Sheffield United, has shone a light on whether the young goalkeeper should be his country's first choice.

Burnley stopper Nick Pope - who completes the picks between the sticks - recorded the most clean sheets of anyone in the Premier League last season, up until the final matchday, where he was pipped to the Golden Glove by Manchester City's Ederson.

REVEALED! Which teams have the easiest – and hardest – starts to the 2020/21 Premier League season?

"I can only say of Jordan that his 24 caps for England, he’s been excellent for us," Southgate told FFT of his long-time No.1. "His performances for England have always been of a high level."

"I think it’s fair to say that he’s had a challenging period for his club, but all goalkeepers on the list have had good moments and goals that have gone in that they’d have hoped to have done better with."

"So we’re hoping to get back working with them first and foremost. It’s for them to go out there and claim the shirt."

Though Harry Maguire will no doubt dominate the news of the England squad over the next couple of weeks, on a brighter note, Leeds United's Kalvin Phillips, Man City's Phil Foden and Manchester United's Mason Greenwood have all been chosen for the England squad for the first time.

"Phillips is a player who we’ve been very impressed with this particular role he plays with Leeds," Southgate said of the call-up. "He’s got to adjust to life in the Premier League but it’s a position we need some competition for places in and we’re interested to look at him at this early stage of the season."

"I think with Phil and with Mason, we know them a bit more. They have the potential to be England internationals for a long time to come."

"As always that is up to them, their mentality and the way they play. But we have belief in them and we’re really looking forward to working with them."