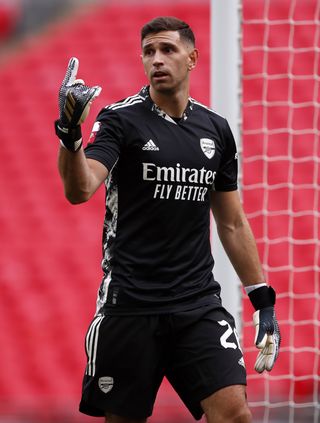 Emiliano Martinez is excited and ready for his ‚Äúnew challenge‚Äù at Aston Villa after ending his decade-long association with Arsenal.

The 28-year-old goalkeeper has been subject of widespread speculation about his Gunners future, having impressed during the final weeks of the season in the absence of injured number one Bernd Leno.

Martinez was between the sticks as Mikel Arteta‚Äôs side won the FA Cup against Chelsea, just as he was when Arsenal beat Liverpool to win the Community Shield later that month.

It proved a triumphant farewell for the Argentina international, who has signed a four-year deal at Villa Park after moving for a reported ¬£20million.

‚ÄúI‚Äôve been around in the UK for 10, 11 years already and I know Villa‚Äôs history and I know how big Villa is,‚Äù Martinez said.

‚ÄúObviously I trust the manager, I trust the goalkeeper coach and the club‚Äôs ambition.

‚ÄúThat‚Äôs why I decide to come here. I believe the club is going forward.

‚ÄúI‚Äôve been at Arsenal 10, 11 years fighting for my spot. When I won the FA Cup and the Community Shield, I spoke to my family and said ‚Äòit‚Äôs time to have a new challenge‚Äô.

‚ÄúWhen Aston Villa gave me the opportunity to fight for the spot and play loads of Premier League games and that‚Äôs why I decided to come here.

‚ÄúI truly believe that we can do a good season at Villa.‚Äù

Martinez made 39 first-team appearances for Arenal after joining from Independiente in 2010, as well as spending time on loan at six clubs ‚Äì Oxford, Sheffield Wednesday, Rotherham, Wolves, Getafe and Reading.

‚ÄúThank you, thank you for all of the years (of support),‚Äù he said. ‚ÄúI thank God for having the opportunity over the past few months to show the Arsenal fanbase what I am made of, and why I went on loan so many times.

‚ÄúIt was always to come back and win them trophies and give them silverware. I did it, I feel prouder than ever.

‚ÄúThey made me as a goalkeeper; not just the club, not just my goalkeeping coaches but the fans as well because they supported me, gave me the confidence to perform as well and I wish them all the best and hope they win many, many trophies.‚Äù

Martinez is now looking forward to working with goalkeeping coach Neil Cutler and his fellow shot-stoppers at Aston Villa, where Tom Heaton, Orjan Nyland and Lovre Kalinic are also on the books.

The 28-year-old knows he is up against some ‚Äúgood goalies‚Äù but manager Dean Smith believes he is an important acquisition for the future.

Dean Smith: "We watched his ùó¢ùó®ùóßùó¶ùóßùóîùó°ùóóùóúùó°ùóö performances last season in a trophy-winning side. It is rare to be able to buy a top-class goalkeeper who hasn‚Äôt yet reached their peak age." üëä#WelcomeEmipic.twitter.com/rNCOeBHwph‚Äî Aston Villa (@AVFCOfficial) September 16, 2020

‚ÄúWe are really pleased with the signing of our new goalkeeper Emiliano Martinez,‚Äù the Villa boss said. ‚ÄúWe know how highly Arsenal rated him and we watched his outstanding performances last season in a trophy-winning top side.

‚ÄúWe moved for Emi when we saw the opportunity, as it is rare to be able to buy a top-class goalkeeper who hasn‚Äôt yet reached their peak age and who can therefore be a key player for our club for the long term.‚Äù

Martinez is the third first-team acquisition of the summer, having signed Nottingham Forest full-back Matty Cash and Brentford striker Ollie Watkins in a club-record deal that could reportedly reach ¬£33million.

Villa have also tied skipper Jack Grealish down to a new and improved five-year deal amid interest in the England international.