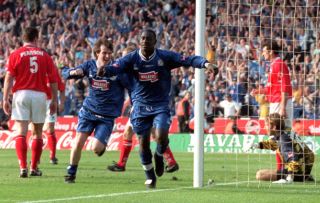 The former Foxes striker has backed Brendan Rodgers to continue the club’s rise next season and says a European title is a possibility.

Leicester missed out on the Premier League’s top four on the final day, losing 2-0 to Manchester United who finished third to overhaul the 14-point lead the Foxes held over them in January.

Rodgers’ side came fifth to qualify for the Europa League and Heskey, who scored 46 goals in 198 games for Leicester, insists the Foxes must look at winning the competition in 2021.

The ex-England international told the PA news agency: “If you are going to go into a tournament, you’re going in wanting to win. If you’re not what’s the point? They have got more than enough to go in and put pressure on teams.

“They’ve been a success. If you were to say at the beginning of the season Leicester would reach the quarter-finals of the FA Cup, semi-finals of the League Cup and finish in the top five, would you take that?

“It slipped away, look at the teams they lost to and should be beating, the draw at Watford, little things like that, but it’s a good season, someone was telling me we were in the top four since September.

“Brendan has been fantastic, he’s been a visionary in what we’ve seen from him.”

Heskey played for the Foxes in the UEFA Cup in 1997 when they lost to Atletico Madrid 4-2 on aggregate in the first round.

It came during Martin O’Neill’s successful time at Filbert Street with Heskey, who eventually left for Liverpool for £11million in 2000.

Now, the Foxes could face a battle to keep Ben Chilwell with Chelsea reportedly keen on the left-back.

They have sold Harry Maguire and Riyad Mahrez for a combined £140million in the last two years and Heskey expects Leicester to make the right call again.

“They have got to be realistic. When a top-four club come calling certain people are going to have their heads turned,” said the 42-year-old, who was speaking at McDonald’s and the Football Association’s Grassroots Football Awards.

“But we’re very strong as a club, they don’t need to sell or balance the books.

“There are aspirations for individual players, they will want to be playing at the highest level and that includes the Champions League.

“The recruitment at Leicester has been top notch, especially when it comes to spending the money made from the players they’ve sold.”

Former England striker Emile Heskey was in Oxford to surprise Diversity Football, winner of a 2020 McDonald’s and FA Grassroots Football Award. To find out more about the awards visit www.mcdonalds.co.uk/awards.