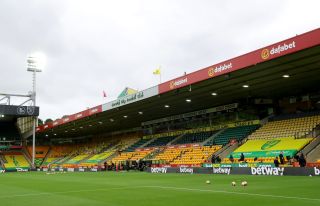 The English Football League will take its first steps towards welcoming supporters back this weekend with nine matches to be played in front of crowds of up to 1,000.

The government has granted the EFL permission for selected fixtures to be used as pilot events for the programme to reintroduce spectators to venues – on a socially-distanced basis – amid the coronavirus pandemic.

There was some confusion over the matter on Wednesday, however, after it was initially announced by the EFL that 10 fixtures had been given the go-ahead to readmit fans.

This was swiftly followed by a statement from Luton, who host Derby on Saturday, saying they had not been given enough time to prepare and criticising the EFL for a lack of communication.

💙🔵 United get the go ahead for 1,000 fans at the @SUFCRootsHall game this weekend – more details to follow from the club soon 👇 https://t.co/6Ig3CEHTSg— Carlisle United FC (@officialcufc) September 16, 2020

This left two other matches in the Championship, four in League One and three in League Two on the list to become the first professional league matches in England to be played in front of fans since March.

The EFL has been anxious for supporters to return to games for the sake of clubs’ financial health. A successful pilot was held at last week’s EFL Trophy tie between Cambridge and Fulham Under-21s, which was attended by 862 fans.

It is hoped supporters can be readmitted more widely after October 1, although the government is reviewing that target date after a spike in cases.

EFL chairman Rick Parry said: “It’s encouraging that we are in a position to move forward with the next phase of the pilot programme and give a small number of our clubs the opportunity to welcome back up to 1,000 fans this week.

“The health and wellbeing of supporters and their wider communities remains the priority, but as we showed at Cambridge, social distancing can be applied safely.

“The requirement to welcome spectators back through turnstiles has not diminished in any way. The financial challenges facing EFL clubs have been explained on numerous occasions, they are substantial and a problem that requires immediate solutions.”

Clubs were invited to apply to host pilot events on Tuesday after the EFL was given the go-ahead by the government. Interested clubs needed to respond quickly but only a limited number were permitted and those based in areas under local lockdown restrictions were excluded from applying.

Leyton Orient have revealed they asked to be considered but withdrew their application due to the timings and practicalities involved.

“We want to welcome back fans ASAP but only when sufficient preparation time is given,” a statement read.

Luton have now also withdrawn despite initial confirmation supporters would return this weekend.

The club said in a statement they responded to the invitation “within an hour” but then “heard nothing from the League until a few minutes before they issued their statement stating that we were one of the clubs taking part”.

The statement added: “Sadly, this does not give us enough time to get ready so we are unable to host spectators here for the Derby match.

“We understand that the EFL are beholden to DCMS, but to request clubs to offer and then not back up quickly, knowing there is such little time to prepare, is very disappointing and we are sorry to disappoint supporters who may have raised hopes of attending Saturday’s match.”

Regarding the wider return of fans, culture secretary Oliver Dowden has said the review into the October 1 target date is being conducted “rapidly”.

Mr Dowden tweeted: “Just held a collaborative & constructive meeting with major sports on the 1st Oct review. There is mutual understanding of the need to get fans back in, whilst all acknowledging the very significant headwinds we face with the virus.

“The Govt is conducting this review rapidly and will complete this work on the return of fans as soon as possible.”