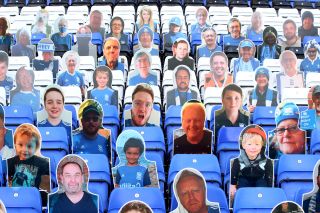 The English Football League has underlined the importance of starting to allow fans back into stadiums this month to help alleviate the “extreme pressure” on clubs’ finances.

Discussions continue between sports governing bodies and government over the return of supporters amid the challenges of Covid-19.

The government had set October 1 as the date that fans could begin to filter back into stadiums at 25 per cent capacity on average, but that is under review after a spike in coronavirus cases nationwide.

EFL head of policy John Nagle said on Tuesday that clubs will make a collective loss of £200million if fans do not return this season, having already been hit by a £50m loss lass term.

The #EFL has issued the following statement in respect to the return of supporters. pic.twitter.com/vbeP47WP6g— EFL Communications (@EFL_Comms) September 16, 2020

The following day the EFL said in a statement: “The EFL remains in discussions with the Government about the pilot programme which may include a limited number of further pilot matches during September with a capacity limited to 1,000.

“The league is clear in its view that social distancing can be applied safely in football stadia and that having crowds at matches is an absolutely essential part of helping to protect club finances, which remain under extreme pressure.

“Therefore, the successful delivery of further pilots will be an important step towards getting larger number of fans into grounds safely.

“The EFL will continue its dialogue with DCMS and SGSA to ensure that evidence and insight secured from these events helps to inform the Government’s position on welcoming back supporters post October 1.”