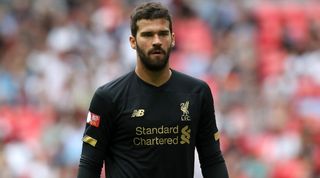 The Brazilian duo have both been shortlisted for the prize along with Barcelona stopper Marc-Andre ter Stegen.

But Ederson was happy to concede that his rival, who played every minute of Brazil’s Copa America triumph over the summer, deserves the award more than he does.

“I think the three of us were the best, but I see Alisson one step ahead," Ederson said, as reported by the Mirror.

"He was great in the Premier League, won the Champions League, the UEFA Super Cup and had a great Copa America as well.

"So I think whoever wins will be deserving and I'm happy for two Brazilian goalkeepers to reach this level.

"We all know the great period that Alisson is living. And I'm having a good time too. Of course, these are opportunities."

QUIZ! Can you name the 50 players with the most Manchester United appearances under Alex Ferguson?

NO, REALLY Granit Xhaka is underrated – Arsenal just need to help him eradicate the errors