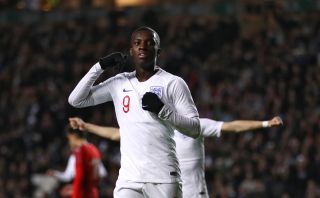 The Arsenal striker grabbed all three goals in a 10-minute spell early in the second half, sealing his hat-trick from the penalty spot as England took full control at the Fadil Vokrri Stadium in Pristina.

Arsenal team-mate Reiss Nelson struck the Young Lions’ fourth shortly after stepping off the bench in the 66th minute and Ryan Sessegnon added a fifth.

Jude Bellingham became England Under-21s’ youngest player when he stepped off the bench in the second period and then became their youngest scorer when he lashed home a superb sixth goal in the 88nd minute.

Aidy Boothroyd’s side made it five wins from five Group Three fixtures in their first match in 10 months, while Nketiah’s goals came via a header and both left-footed and right-footed finishes.

England dominated the first half in terms of possession and efforts on goal, but had nothing to show for their superiority at the interval.

But Nketiah, handed the captain’s armband, put England in front six minutes after the restart, heading home Tom Davies’ cross from the right edge of the penalty area.

Todd Cantwell and Davies combined to set up the second goal four minutes later, with the latter’s diagonal ball into the box finding Nketiah, who controlled neatly and fired left-footed into the bottom corner.

Nketiah’s third came via the penalty spot, with his right foot, after Conor Gallagher had been sent tumbling in the box.

Nelson slammed home the fourth after good work by Max Aarons and England made it 5-0 in the 82nd minute as Sessegnon swept home in style from the left edge of the area after being set up by Callum Hudson-Odoi.

Borussia Dortmund teenager Bellingham, sent on as a substitute soon after England’s third goal, rounded off the scoring in the closing stages with a thumping long-range finish.