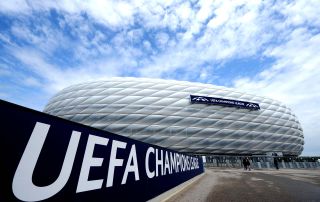 European clubs will miss out on 575million euros because of rebates owed to Champions League and Europa League broadcasters related to the coronavirus pandemic, the chairman of the European Club Association Andrea Agnelli has said.

ECA boss Agnelli, who is also the chairman of Juventus, set out in stark terms the impact of the Covid-19 crisis on the European game as he opened the organisation’s general assembly.

“We have seen very important rebates to the principal broadcasters both at domestic level and at international level,” he said.

“We have seen a £330million rebate in the Premier League, we have seen a downturn in the Bundesliga domestic rights of about 200million euros (approx 181million) and we are in the process of finalising the account with UEFA with a reduction of around 575million euros (approx £520million) for the international club competitions, and that is all money that is not going to be distributed.

“We (European clubs) are looking at a revenue decrease of approximately 4billion euros (approx £3.6billion) in the next two years.”

Agnelli said the absence of supporters from stadiums due to social distancing measures has meant “the complete wipeout of an important source of revenue for everybody” and predicted a downturn in sponsorship revenue and a 20 to 30 per cent drop in the overall value of the transfer market.

He said talks over changes to the format of European club competitions have been stalled with the continent’s leading sides in “crisis management” mode.

The Italian has been one of the leading voices in calling for a revamp of continental competitions and how teams qualify for them from 2024 to give clubs greater certainty over revenue.

However, he accepts those discussions have had to be parked.

“When we met in Geneva last year following the extraordinary general assembly of Malta, that was meant to be the very first step of a long consultation process that should have led us to define what we actually wanted football to look like in 2024, which is the first year of the new international match calendar, and what kind of competitions we wanted,” he said.

“In my opinion, many of the aspects that were on the table in September 2019 are still valid, but I still think we are in the middle of crisis management, and that crisis management is not over yet.

“We will need to stall before we can properly address what we want to have in the future, we need to have a fairly consistent understanding of what the significance at the economic level (of the pandemic) has been for clubs.”

UEFA president Aleksander Ceferin expressed his pride at how the European football community had worked to complete domestic and continental competitions, and highlighted the importance of a united approach as and when discussions over how things look from 2024 resume.

“The future is in our hands,” the Slovenian told club delegates.

“Our mutual trust and sound partnership will bring us soon to identify formulas to consolidate the incredible success story of the UEFA club competitions. If we are united, football will win.”