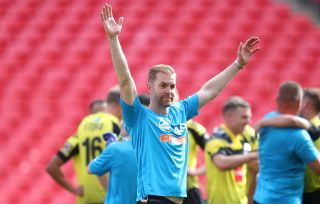 Harrogate boss Simon Weaver has warned his side will not just be making up the numbers in Sky Bet League Two this season.

Town play their first competitive game as a Football League club on Saturday at Tranmere in the first round of the Carabao Cup.

“It’s going to be a big moment in the club’s history,” Weaver told the PA news agency. “It will always be remembered as we step foot on to that pitch.

“Wembley was an amazing occasion and that’s given us an opportunity now to compete at the next level.

“We can’t wait to have a good go at it. It’s a thrill to be involved in the cup competitions.

“But we’re not just here as the little team from lovely Harrogate who are just going to enjoy the experience. We want to get good results on the board straightaway.”

Weaver, appointed as Town’s player-boss in 2009 and now the Football League’s longest-serving manager at the age of 42, admitted to some doubts ahead of the club’s landmark fixture.

“As a manager your concern is whether our success has gone to anyone’s head,” he said.

“The euphoria of Wembley was only five weeks away. Have we come back too soon? Is it going to be a case after the Lord Mayor’s show?

“But so far the signs have been very good. We’re a team of grafters. It’s been an amazing time and we just want that feelgood factor to continue.”

Weaver said promotion had not left Harrogate immune to the same financial difficulties which have affected all clubs during the conronavirus pandemic.

“It’s been a whirlwind since Wembley because there’s been so much to do,” he said.

“Trying to sort out the bonuses for the existing lads to start with, because of coronavirus it’s been hard, every club has been bleeding.

“But we wanted the players to feel rewarded and at the same time we’ve had to strengthen the squad.”

Midfielders Connor Kirby and Tom Walker, plus defenders Jake Lawlor and Kevin Lokko have been signed since victory over Notts County.

“The skill required is to strengthen what you’ve already got without changing the dynamic of the squad, which is challenging,” Weaver said.

“But I’m happy and hopefully there’s room to get a left-back in and maybe an attacking option as well.”