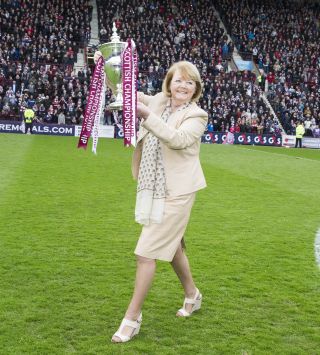 Hearts owner Ann Budge has vowed the club will come back stronger and “win the war” after losing their legal battle against relegation.

The pair saw demands for a combined £10million compensation payout rejected and now face the prospect of paying at least some of the legal costs of the Scottish Professional Football League and promoted clubs Dundee United, Raith Rovers and Cove Rangers as the arbitration panel considers expenses claims.

They also face Scottish Football Association disciplinary action for initially taking their case to the Court of Session.

Budge claimed she was not “totally surprised” by the outcome of their unfair prejudice claim against the SPFL after being warned by her legal team that they faced an “uphill battle”, but one she felt they had to fight rather than “simply sit back and accept the unfairness that was being meted out to us”.

Budge added: “What has been allowed to happen in Scottish football, where fellow member clubs and our governing bodies have stood back and allowed totally disproportionate financial damage to be imposed on three of its members, can only be described as shameful… as indeed, should the SPFL’s recent self-congratulatory statement.”

The Hearts chairman claimed her counterparts needed to stand up and be counted rather than bemoaning the decision-making process in Scottish football and “the perceived lack of leadership, the lack of commercialism”, claiming she had little cause for optimism that things would improve.

But she will now focus on helping Hearts bounce back by winning the Championship having put her faith in new manager Robbie Neilson, the man that led them to promotion in 2015.

“My rant is over for now,” she said. “While frustrated, disappointed and angry with much that has gone on over the last four months, we must now move forward.

“We will suffer serious financial losses as a consequence of losing this particular battle but we will survive and we will come through this stronger than ever.

“We have suffered a series of blows over recent months, but our spirit has never been stronger. We will continue to run our club with honesty, transparency and integrity. These are the values we have always adhered to and we will continue to keep them front and centre of everything we do.

“We will also lead with strong financial management and, importantly, with confidence.

“We look forward, once again, to celebrating a successful year, culminating in winning the Championship and getting back to where we belong. Robbie has done it before and, with your support, we can make this a year to remember for the right reasons as well as the wrong.

“I make these statements, confident in the support I know we will have from our incredible fans and sponsors. The messages of support that I, personally, have received throughout this enormously difficult period have been absolutely amazing. Let me say ‘thank you’ to each and every one of you.

“I am sorry we did not win this battle but as we all know, it is winning the war that counts.”