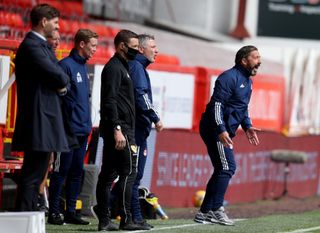 Clubs voted to allow five subs, as long as teams only stop the game a maximum of three times.

Ryan Hedges came off the bench to fire the only goal against St Johnstone on Thursday night and McInnes saw his other subs influence the match.

McInnes brought on attacker Connor McLennan and wide player Matty Kennedy at half-time and the resulting tactical changes saw his side develop a more solid feel.

The half-time switch allowed him to make three more changes and both Craig Bryson and Hedges were involved in the 82nd-minute goal before experienced full-back Shay Logan came on to help Aberdeen comfortably see out the victory.

Saints manager Callum Davidson made two changes before the goal and his subsequent efforts to get back into the game failed to come to fruition.

McInnes said: “The subs helped us and we have seen that this season, even in games we have watched, that subs make an impact on certain teams’ performance second half, and I thought we had that.

“McLennan allows (Lewis) Ferguson to drop back, that speed allows us to get in behind a bit more and create space for others.

“I thought Matty Kennedy showed personality coming on, got us up the pitch from the right-hand side and put in some great crosses.

“And Hedges comes on and gets the winning goal, a combination of Bryson making space with the run and Hedges driving into space.”

McInnes is set to have further depth when Livingston visit on Sunday when defender Scott McKenna and forward Bruce Anderson return following a period of self-isolation.

The Dons boss is also looking for a loan signing to cover for injured strikers Sam Cosgrove, Ryan Edmondson and Curtis Main.

“Livingston will be a test on Sunday,” McInnes said. “They’ve got their identity back in the last couple of games, Gary Holt has said that, the work rate and the discipline of the team.

“They set out to get a point against Rangers and they got it by scrapping and working and you have to respect that.

“They’ve lost their talisman striker (Lyndon Dykes) and they need to rely on other things, the way we do at the minute with Sam and Curtis out.

“Their energy and discipline is outstanding and it’s something we’re going to have to overcome.

“Hopefully we can address the number nine situation, get a couple more boys back involved, we’ve got options from the bench, and we’ll be ready to go again on Sunday.”