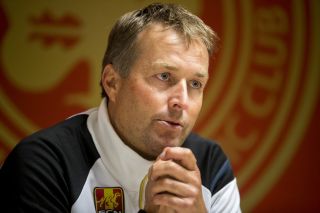 Denmark manager Kasper Hjulmand and star turn Christian Eriksen are unsure whether their Nations League clash with England will go ahead after Phil Foden and Mason Greenwood breached coronavirus protocols.

The youngsters made their debut against Iceland on Saturday but are now heading home after Three Lions boss Gareth Southgate confirmed they had broken the Covid-19 bio bubble.

It is an embarrassing moment that has led some to question whether Tuesday’s Nations League match in Denmark can go ahead – although there is no suggestion from UEFA that the game is under threat.

Southgate and the Football Association have attempted to assuage any concerns, but the Danish side’s head coach was left wondering what was happening when he faced the media.

“To be honest, I haven’t thought about it. So, I guess in the next minutes, hours I’ll know a little bit more.

“But I think it’s very important that we stay in the principles, in the protocols that we have been given.

“It’s about football and the survival of football. I think that we are able to play is very important.

“There’s been a lot of things going on so we can actually play these matches, so we have to be focused and live up to the protocols.

“The Danish FA, DBU, will take care of this situation. We have our security manager, we have our people, our sports director, who would of course look into it.

“We, for sure, will accept whatever UEFA comes up with.

“If they think it’s a good idea to keep going, of course we’ll see and we hope we can play this game, of course.”

“I think like our coach said, if they haven’t been with the team afterwards obviously and everyone’s getting tested like we are then I hope that all the restrictions that have been made are under control and then we can play the game,” he said.

“But obviously if they’ve been hanging around ever since they saw someone outside the bubble, it’s a different story.

“But (from) what we know so far, I don’t know what’s going to happen.”