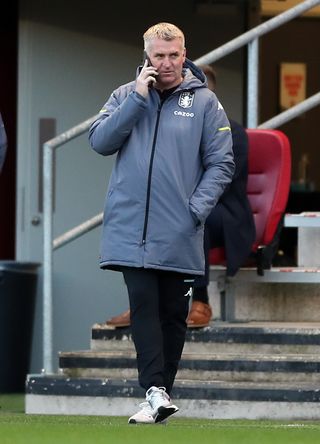 Aston Villa boss Dean Smith has revealed he is determined to further strengthen his squad before the transfer window closes next week.

Smith’s buoyant side face Fulham on Monday on the back of seven games unbeaten and new boy Bertrand Traore is set to feature after his stunning debut goal against Bristol City in midweek.

But Smith is still not satisfied with the strength of his squad and is looking to add to his numbers following the departure of Mbwana Samatta to Fenerbahce.

Smith on recruitment: “We are always looking; we are probably one short in the squad at the moment. With Ally going, we are looking at the forward line, but also midfield.”— Aston Villa (@AVFCOfficial) September 26, 2020

Smith said: “We’re always looking in the market, we’re probably one short in the squad at the moment so we’ll keep looking at that.

“Our sporting director at the moment has got his finger on the pulse, hopefully we might get one more in and maybe a couple more out.”

Despite Traore’s immediate influence, Smith is keen to strengthen in the final third while a further option in midfield would not go amiss.

Smith added: “There’s a number of positions, and obviously with [Samatta] going out, you look at the forward line, but also midfield as well.

“We’ll see if there’s one who can fit both for us.”

Defender Bjorn Engels is back training for Villa following an Achilles injury but is not expected to feature against the Cottagers, while forward Wesley and goalkeeper Tom Heaton (both knee) both remain sidelined.

Smith revealed that defender Ezri Konsa will be available despite appearing to pick up a minor injury in Monday night’s 1-0 win over Sheffield United.

“The only ones who won’t be available are Bjorn Engels, Tom Heaton and Wesley,” added Smith.

“Ezri Konsa, everyone told me he had a bit of a hamstring strain at half-time (on Monday) – it wasn’t, it was a strain in his glutes – and he is back training.”