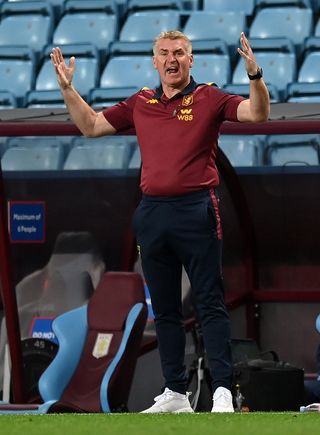 Boss Dean Smith called on Aston Villa to finish the job after an invaluable victory against Arsenal put them in pole position for Premier League survival.

Trezeguet struck an excellent winner after 27 minutes to grab a crucial 1-0 win at Villa Park.

It lifted Villa out of the relegation zone for the first time since February and they head to West Ham for Sunday’s Premier League finale.

They are out of the drop zone on goal difference after Watford suffered a 4-0 hammering by Manchester City on Tuesday.

Villa now lead the race to beat relegation ahead of Watford and Bournemouth having been seven points from safety three games ago.

Smith said: “There’s one game to go, similar to after the penalty shoot out at West Brom (in last season’s play-offs). All we have done is put it in our own hands and we have to put a performance in and get a win at West Ham.

“If we work as hard as we did and show the quality since the restart we have every chance.

“It was a big performance and an even bigger win. We knew we had to win at least one game to catch Watford up and to get that win was special.

“There was some heroic defending, Jack (Grealish) had his best game since football returned, Pepe’s (Reina) experience also helped the lads in front of him.

“I said before I feel we’re a fitter team now, the lockdown gave us that opportunity to get the lads into a better place. We felt these were the four games to target to get the wins we needed.”

Trezeguet, who scored a brace in the win over Crystal Palace, settled the game when he fired in low after Conor Hourihane’s 27th-minute corner whistled through the box.

Arsenal failed to fire or find the inspiration which helped them beat Liverpool and Manchester City in their two previous outings.

Eddie Nketiah’s header hit the post but the Gunners will need to win the FA Cup against Chelsea next month to return to Europe next season.

A plane flew a banner across Villa Park reading ‘Back Mikel Kroenke Out’ as fans showed their opposition to owner Stan Kroenke and Arsenal will finish outside the top six for the first time since 1995.

Boss Mikel Arteta: “The Kroenkes and the board and the sporting director, I have their full backing. I have that 100 per cent – the fans have to believe what I’m saying.

“We are putting a strong plan together to do as much as we can in a short period and the league table doesn’t lie. When you have the margin of points with the top teams it’s for a reason.

“We need to improve in many areas, the team and individually. The top teams in certain areas are better than us.

“It has to hurt and we have to suffer, it’s not good enough for this club. We know the challenge, it’s really big and we’re excited for what we have ahead of us.

“There are going to be some ups and downs but sometimes it’s good to see the reality and move on and improve.”